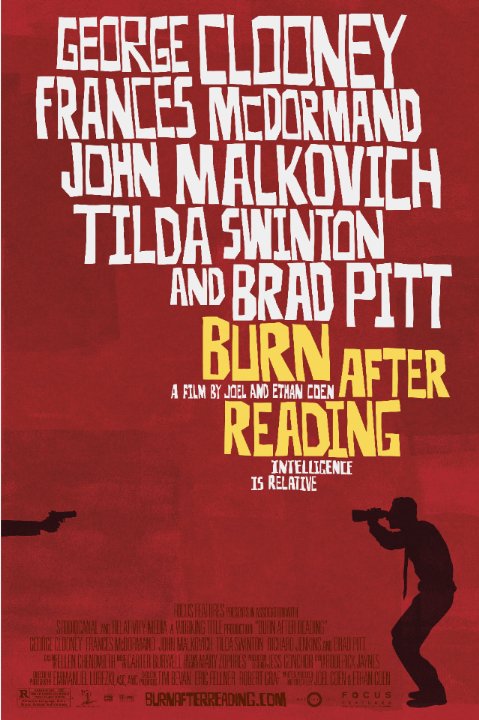 Plot: A dark spy-comedy in which an ousted CIA agent (Malkovich) loses his memoir and it falls into the hands of two gym employees (Pitt) and (McDormand) looking to make some dough off the find. -- Supercrum

The Coen brothers at their most wickedly funny since "Fargo."

My kind of humor.

If you've seen Burn After Reading, then you know exactly what kind of humor I like.

I'm a fan of the Coen Bros., and I'm excited for their latest film 'Inside Llewyn Davis'. So with that said, why not review some Coen Bros. movies?
Burn After Reading had me laughing for the majority of the movie, because I have a very odd taste in humor. I like black comedy, mashed with quick and British humor. This movie shows elements of all of them.
Not a single joke is left in the cold. The comedic timing was priceless.
The acting was great. Every actor understood the performance they had to give in a movie like this. Silly.
Brad Pitt and George Clooney were perfectly cast. Especially Clooney really showed what he had to offer. He was naturally charismatic and could also pull off some shocking …

"Burn After Reading" by Yojimbo

Two gym employees try to blackmail an ex CIA agent in the mistaken belief that they have stumbled on some sensitive material and wackiness ensues. Burn After Reading I think was trying to recreate the marriage of witty comedy and bleak criminality of Fargo but somehow they don't sit together anything like as well here. The cast is exceptional, but every character is basically a self serving asshole with the possible exception of Brad Pitt, who is just an idiot. There are some funny lines and Clooney and Simmons are as great as always, as are they all really but it's not all THAT funny, and the plot is a little too aimless and random to fully engage. It's not a bad film by any means, but by the Coens' standards I found it a little disappointing.

Osbourne Cox (John Malkovich) resigns as a CIA analyst. In effect, Katie (Tilda Swinton) tries to file divorce. Harry Pfarrer (George Clooney) dates Linda since his divorce is being processed. Chad Feldheimer (Brad Pitt) calls Osbourne about documents left, which are his memoirs. Linda Litzke (Frances McDormand) plans of having 4 operations and looking for a partner on the internet. She finds ways to convince her boss for an advance.

With the Coen brothers, the screenplay is always enlightening with some brilliant lines: Harry â âYou just can't help dragging everything down.â Ousbourne â âYouâre part of a league of morons.â Linda & Harry conversing â âI think that it's very important to maintain a positive attitude.â âAlways up, always ebullient.â …

Since Blood Simple is getting a Blu-Ray release in the near future, hopefully Miller's Crossing won't be far behind. True Grit looks to be a winner - I think it has a chance come awards season as well.

ps. who's stoked to see their True Grit remake? the trailer looks epic.

Barton Fink was weird to me. The ending was a classic, effed up cohen brothers ending and John Goodman was great, but as a whole, it was sort of boring. Miller's Crossing is one of their earlier ones that not many have seen. Great tommy gun scene in that one. and George Clooney was hilarious in Burn After Reading, &quot;oh these are nice floors.&quot;

Yeah this one was decent.&amp;nbsp; I still wouldn't call the Pitt scene predictable in how he was killed. I mean yeah, you saw the previews, you could put two and two together.&amp;nbsp; What do you think is the most over rated? 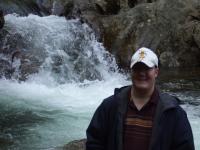 I loved this film and thought the ending with J.K. Simmon's was hilarious. The Coens have yet to disappoint me and I can't wait for their next film. One minor flaw though (Spoilers) I saw the shooting of Brad Pitt's character from a mile away but other than that very well worth the time!