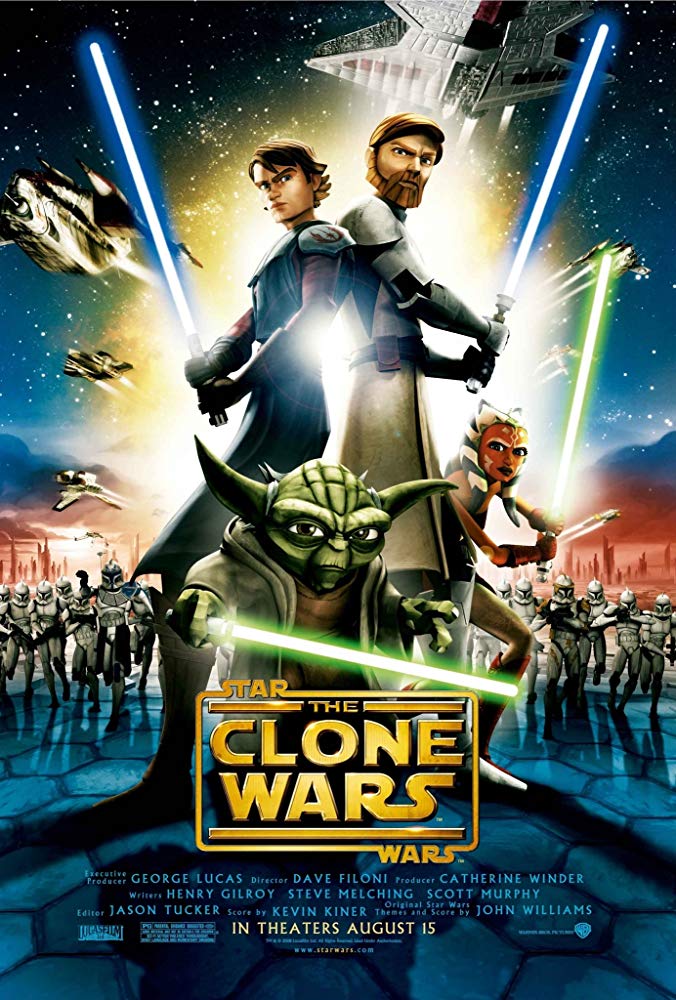 Plot: As the Clone Wars rage across the galaxy, the front lines are manned by valiant Jedi Knights, including Generals Obi-Wan Kenobi and Yoda. Meanwhile Anakin Skywalker and his Padawan learner Ahsoka Tano are given a critical mission where they will have to work with the Hutt crime lord Jabba. Count Dooku and his deadly apprentice Asajj Ventress have their sites set on stopping Anakin, no matter what the cost. -- Chris Kavan

Should have stayed on TV in my opinion.

Not a bad addition to the Star Wars universe. I liken it to one of the many Star Wars novels that have been written made into a film. The target audience is definitely children, but there's enough here to satisfy fans of all ages. I liked the animation and the battles, though some of the kid-friendly dialogue got a little tiring. People love to tear down George Lucas for some reason, so it didn't surprise me that critics hated it, but it's really not that bad. I could have done without the late subplot that got Padme and C-3PO involved but understand why it was in there. Check it out if you're a fan.

The Star Wars universe attempts to break ground through computer animation. The outcome is a bevy of retreaded, yawn outloud, and block figured characters attempting to solve a kidnapping conspiracy. Nothing in this appears the slightest bit thought out and degrades the franchise further into mediocrity.

Flaws aside (and plentiful), I still liked it.

Even though it will play better when broken down into 20+ minute segments, I kind of liked "Star Wars: The Clone Wars". Not as much as the previous animated effort, of course, but it nevertheless fits in to the Star Wars universe with a little getting-used-to.

1) I never took Obi-Wan for a wisecracking warrior. His personality as portrayed in this movie is not my favorite depiction.

2) Even though the battles provide nearly non-stop action, it is still somehow tedious. That's where smaller doses may be more entertaining and less mind-numbing.

3) The music was awful! The variation of the Star Wars theme makes the Meco version of the '70's sound classic. My friends claim any music NOT using the theme is quite good, but I can't seem to get past …

Should Have Stayed on TV

I wasn't expecting too much going into this. I knew there was a Star Wars animated series coming up, but the powers that be decided a feature film should be introduced first. They probably should have just made a 2-hour premiere on TV instead.

Geared toward the younger generation, this takes place between episode II and III. With aiming towards this target audience there is a lot more comedic interaction - I dare say Anakin shows a wider range of emotion here than he did during nearly the entire prequel trilogy. Still, the original voice talent is limited to Samuel L. Jackson, Christoper Lee and Anthony Daniels - and out of them only Lee has significant screen time.

The best thing I can say about Clone Wars is that they didn't screw anything up. The new characters are decent if not …

No posts have been made on this movie yet. Be the first to start talking about Star Wars: The Clone Wars!