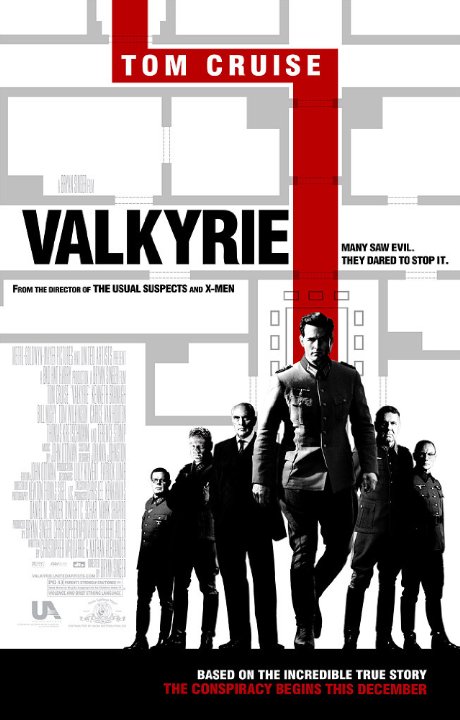 Plot: The mysterious plot to assassinate Adolf Hitler during WWII with the lead assassin as the star.

This was a solid war movie with great acting.

Better then I expected it to be.It was annoying that Tom Cruise sounded like Tom Cruise even though he was suppose to be playing a German

The historical context of the film is skillfully recreated and Singer is a master at raising the bar on tension level. All the main cast disappear into their roles and are almost unrecognizable. At times, the film can be slow and lifeless, though, and doesn't hold the same emotional punch as a similar film, such as, say, "Downfall."

Colonel Claus von Stauffenberg (Cruise) together with General Ludwig Beck (Stamp), Dr. Carl Goerdeler (McNally), and Erwin von Witzleben (Schofield) plan the assasintion of Adolf Hitler. Cinematography, performances and direction were really good. The film however was not as entertaining since some parts were a bit dragging. Screenplay were noteworthy with lines ""Long live sacred Germany!" and "My duty as an officer is no longer to save my country, but to save human lives. I cannot find one general in a position to confront Hitler with the courage to do it." from Stauffenberg. Lacks some spark or emotional connection from the first half of the movie. Valkyrie's intent though was well exhibited with aims to topple dictatorship, loyalty, bravery and conspiracy.

Missed Out On Being A Masterpiece, Or Even Good

Adolf Hitler committed suicide April 30, 1945. Valkyrie is about a group of men who are plotting to assassinate Hitler. Due to the information I have just given to you, you now know that by the end of the movie, Hitler will still be alive. This is a bit of a problem for Valkyrie, but this film does a relatively good job of making you forget about this conclusion.

The A-list cast does a more-than-excellent job at acting, though the actual character development is extremely minimal for most characters.

Valkyrie does something very smart at the beginning of the movie. We understand that the characters are all speaking German, but they speak English anyway. This eliminates the need for silly German accents, and is much less distracting. There are times when this is contradicted …

Anyone who has seen The Desert Fox will be familiar with this story, but instead of concentrating on Rommel, it examines the role of Claus Von Stauffenberg in the plot to assassinate Hitler after many of his officers began to question not only his tactics but his sanity. The theme of the two films is actually very similar; to show that not all of the German military or its people were Nazis, and there were some who were willing to sacrifice their lives to try and stop him. For me the most interesting part of the film takes place after the bombing when a plan is implemented to take over Berlin and I had no idea how far it went into effect and how close it came to succeeding; I can't help but wonder how different the world would be now if Olbricht had shown a bit more backbone or the …

I am pretty excited to see this movie.&amp;nbsp; Hopefully I will get to this weekend.

He'll struggle that's for sure. Let's just say it will not be the same since his&amp;nbsp;crazy antics on Oprah

Anyone think that Cruise will actually do an outstanding job like he once did?&amp;nbsp; I am not sure about this one. It doesn't seem to fit him.&amp;nbsp; I predict he will struggle for the next 5 years while he transitions to older roles.&amp;nbsp; What do you think about this movie?