What Ever Happened to Baby Jane? Movie Information 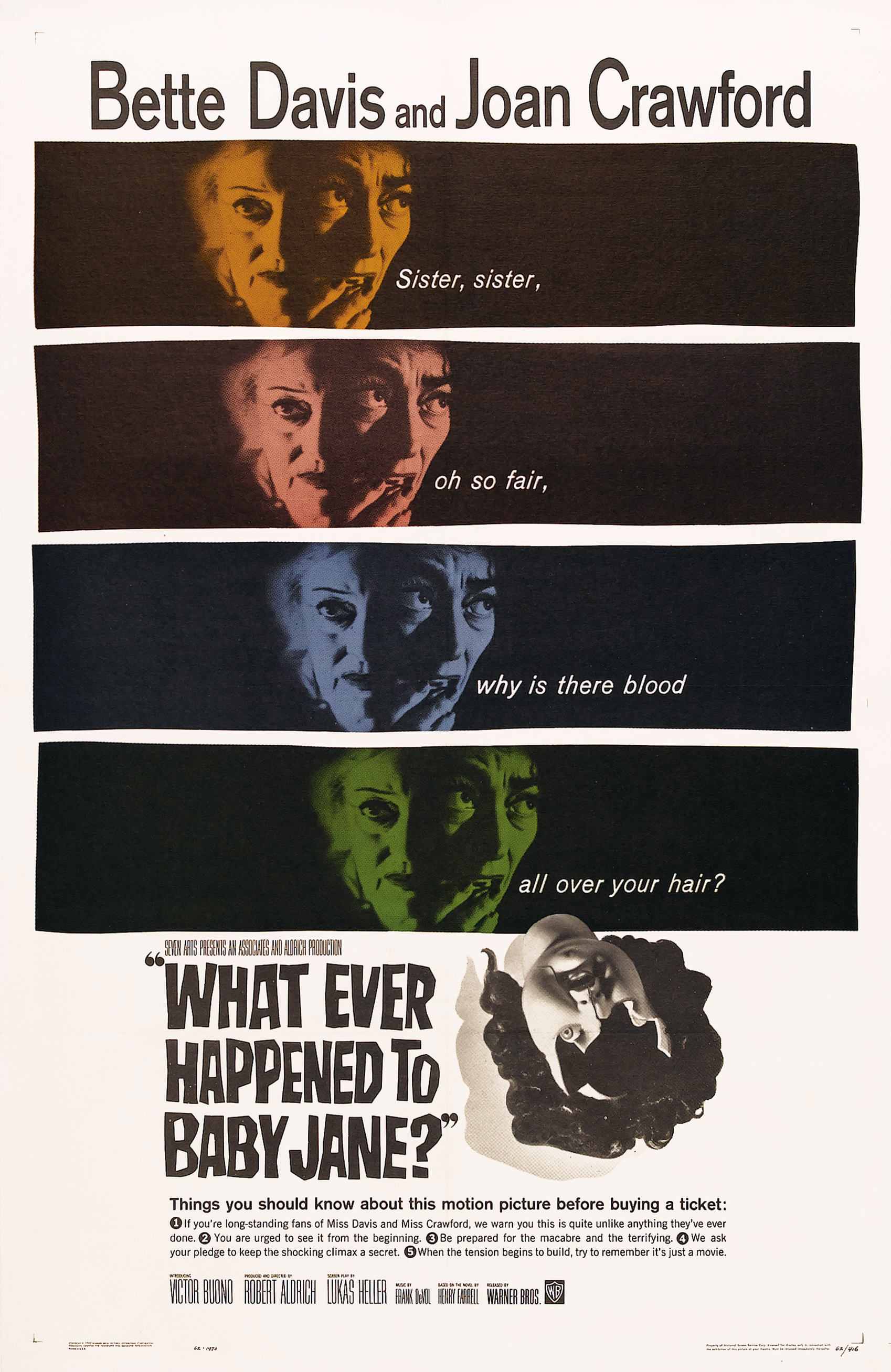 Plot: A gargoylish former child star, Jane, and her former-movie-star sister, Blanche, now crippled, are isolated in their decaying home. Bodies begin to accumulate as Jane's grip on reality becomes more and more tenuous. Will Blanche survive her sister's delusions?

Most famous for the backstage feud between its leading ladies, " What Ever Happened to Baby Jane?" is a twisted thriller about sibling rivalry.

The grand dame of psycho-biddy horror flicks, Whatever Happened to Baby Jane is an undeniably silly but suspenseful thriller with just the right amount of horror and humor.

Led by two brilliant performances, What Ever Happened to Baby Jane? is a shattering psychological thriller, centered around the intriguing relationship between two aging sisters. Grey Gardens this is not, however, as Bette Davis turns in a commanding and terrifying performance as the overpowering Baby Jane Hudson and Joan Crawford is appropriately weak and pathetic as her sister, Blanche. The film hints at Sunset Boulevard-like themes of aging starlets, but takes a dark turn into Hitchcockian noir territory, resulting in a more harrowing film. The film's scares are subtle, but work within the context of the plot, as the engrossing performances make the film's script work.

What did ever happen to Baby Jane?

Not a terrible film. But, I just don't quite understand how this is sometimes considered a horror film? Having said that, Bette Davis gives a tour-De-force performance that is hard to beat. How Anne Bancroft beat her out for the Best Actress Oscar beats me. I'll admit, I've Never seen the Miracle Worker (1962). She is great!

One thing that hurts this film, is that it reminds me of two films that came before it, and were better, Sunset Boulevard (1950) and Psycho (1960).

Sunset Boulevard is also about a has-been, delusional star (actress in that film, child-star in this one), who is trying desperately to cling to the last remnants of her fame. I thought the mystery in Sunset Boulevard was better than the one in this film.

It also reminded me of Psycho. In Psycho, Norman …

"Whatever Happened To Baby Jane?" by Yojimbo

A wheelchair-bound ex-Hollywood star is terrorized within her own home by her jealous and alcoholic elder sister. Whatever Happened To Baby Jane? hasn't got the most promising premise for a "comedy", but like Psycho and Dr Strangelove, it's the macabre streak of black humour that provides the stroke of genius that makes it what it is. The plot read as straight is a very melodramatic, soapy affair, but Aldrich's skewed approach makes a black-hearted comedy of grotesques out of it all in a similar way to Sunset Boulevard. The cast are all great, but it is Bette Davis' show all the way as the increasingly unhinged child star-turned embittered old harridan and she sends herself up rotten; the scene where she recreates her old act has to be seen to be believed! The attractive cinematography …

Top 12 Films of 1962 by CarnivorousCouch

No posts have been made on this movie yet. Be the first to start talking about What Ever Happened to Baby Jane?!