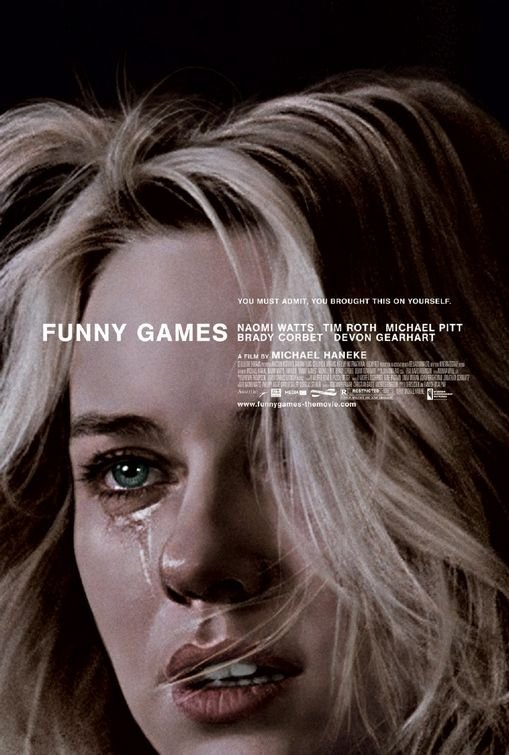 Plot: A family vacation is interrupted by two educated, articulate and sadistic young men who come up with some interesting games for the family to play. -- Chris Kavan

If you've already seen the Austrian original, there's really no point in watching this shot-for-shot American remake; unless you want to relive the hellish nightmare, but are too lazy to read subtitles.

It's relentlessly horrific and grotesque.... I loved it!

A home invasion film that doesn't do anything new, but provides an okay time. Pitt and Corbet do make interesting villains and save the film from mediocrity.

Michael Haneke's didactic essay on violent media is strangely well-suited for an American environ, with it's ironic cruelty and sadism being more pertinent for an audience that has eagerly embraced a bevy of grim and bloody sensationalised spectacles than one that has simply braved too much to relish such depravity. The comparative professionalism of this film to Haneke's naturalistic original will probably lead purists of this type of confrontational cinema to cry foul of bourgeois predilections, but I would humbly submit that the improved mise-en-scene actually works to absterge any trace amounts of sensationalism that were left by the independent aesthetic (which, in truth, is just as manipulative as the classic summer blockbuster) of the first version, creating a harsher, crueler, …

A pair of sociopathic young men take a young family hostage and force them to endure a series of torturous mindgames for their own amusement. Funny Games is basically torture porn's answer to Rope, the two young conservative psychos are obviously intelligent and creepily polite in the same way as the Leopold and Loeb alikes of that film. In fact Haneke admirably uses the Hitchcockian device of making certain events happen off screen, sparing us the more gruesome violence and its knowing self-referential post-modernism can be used as the excuse that its "making a point" in the same way as Natural Born Killers and Man Bites Dog were. Allegedly. But the irony card is a very easy one to play and never escapes the fact that it relies on exactly the same format and devices of every other …

I Love Twisted Films But This Isn't One of Them

Going into the cinema, I thought I was in for a typical psychological thriller. But about an hour into the film, I felt kind of bad watching the story unfold as the family is terrorized and tortured in ways that are twisted and gratuitous. I wanted to like the film because it was daring and different (acknowledging that it is also a decent remake regardless of it being done shot by shot as the original), but there's something about the picture that is rotten and not meant to be taken in easily. If the point of the film is to make its audiences extremely uncomfortable, I give kudos to the director. I must say the acting here is on a higher level compared to other psychological thrillers. Michael Pitt and Brady Corbet give convincing performances as two preppy psychotic teenagers with a …

No posts have been made on this movie yet. Be the first to start talking about Funny Games!