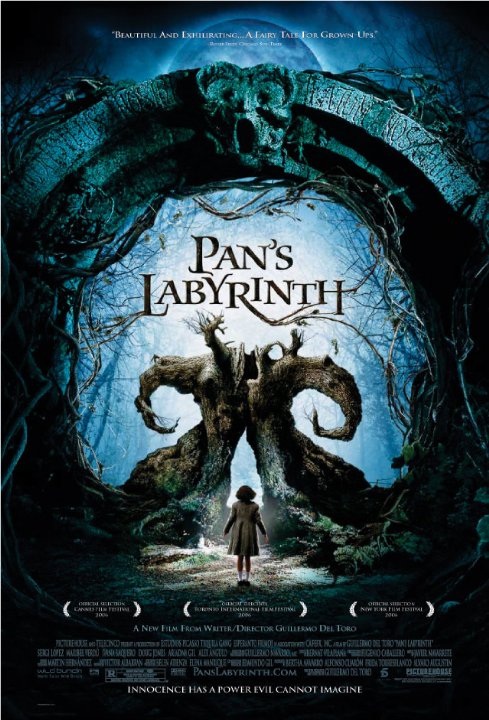 Plot: A WWII inspired story of an imaginative young girl who is forced to move onto a small military outpost with her mother. She creates a world of fairies and fawns to escape the unhappiness in her life.

Dark and tragic fantasy movie about a girl escape her violent world through fairy tales, set during Spanish Civil War.

This movie is like Alice in wonderland for grown ups that are into fantasy's.

Director: Guillermo del Toro Producer: Alfonso CuarÃ³n. What can go wrong with this?

Pan's Labyrinth is a spanish drama/fantasy movie from the year 2006. It's about a girl who is forced to move withh her pregnant mother to a military camp in North Spain, there she creates a fairy tail world where she has to master three tasks to be a princess in an underground world...

This is not a real fantasy movie, this has actually more of drama in it, The drama part is set to be the subplot, but after an hour it becomes the main-plot. that is a bit confusing but is not that tragical. The script is, although that, very well written and shows of something about the Spanish civil war. The cinematography of this movie is just perfect, there is no doubt about that. The make-up and the art …

A little girl and her pregnant mother are relocated to an army camp to be with the unborn baby's father, an officious and sadistic captain in Franco's fascist military. Pan's Labyrinth is a gothic fantasy that sees a young girl escape into a world of fauns, fairys and political allegory to escape her cold, cruel, clockwatching, jack-booted step-father who is a kindred spirit of Schindler's List's Goethe. Once again Del Toro blends beautiful imagery with an affecting war story and the result is an enchanting experience that mirrors the fight between good and evil in both the real world and a young child's imagination in a way that reminded me a lot of the work of Hayao Miyazaki. Young Ivana Baquero puts in a performance that belies her tender years and the stunning visuals create a …

The setting is during the post-Civil War Spain in 1944. Carmen (Gil), with Ofelia (Baquero), will meet the fascist Captain Vidal (LÃ³pez). Mercedes (VerdÃº), one of many loyal helps of the Captain, is a spy for the anti-fascist rebels, including her brother. Ofelia meets a faun (Doug Jones), who believes her to be Princess Moanna and gives her three tasks to complete to ensure everything will be intact. Some amazing quotes: Faun â âA long time ago, in the underground realm, where there are no lies or pain, there lived a Princess who dreamt of the human world.â Dr. Ferreiro â âBut captain, to obey- just like that- for the sake of obeying... without questioning... that's something only people like you can do Captain.â Carmen â âYou're getting older, and you'll see that …

Pan's Labyrinth is a very well-done film, but it's definitely not a kids' movie, nor is it for the faint of heart. &amp;nbsp;I wouldn't take kids to see Pan's Labyrinth. &amp;nbsp;It's too intense for kids, as many other movies are.

In my opinion the very brutal scenes made the contrast with the innocence of the young child more interesting. This is definitely my favorite movie. Although just as some of you before I saw it I thought it was a kids movie too.&amp;nbsp;

Pan's Labyrinth is definitely not a kids' movie, but it definitely had a very good story line to it. &amp;nbsp;Some parts are kind of brutal, but they're an integral part of the story. &amp;nbsp;

I knew right away that Pan's Labyrinth was not a kid's movie at all, but a grim (pardon the pun.) fairy tale for grown-ups. &amp;nbsp;

i thought it was a kid's movie until i actually watched it &amp;amp; then i had to tell my little brother to close his eyes &amp;amp; cover his ears&amp;nbsp;through the violent parts. the story line wasn't too bad, but it is disturbing especially the end. i liked it, as weird as that may sound, but don't recommend it for anyone who might have a sensitive stomach to bloody beatdowns.