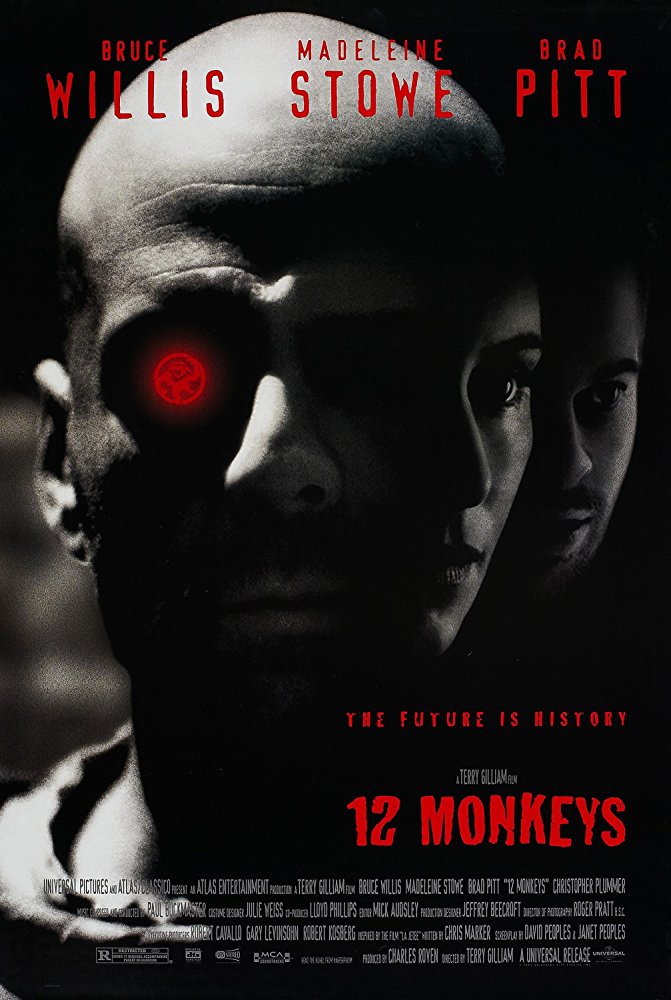 Plot: In a future devasted by a virus, a convict is sent back in time by a group of scientists in hopes of learning how to stop the disease.

Extremely confusing, but that's exactly what holds your attention.

Remember the time when we used to like Bruce Willis. The film is about a convict is sent back in time by a group of scientists in hopes of learning how to stop the disease. The acting in this movie was brilliant, Brad Pitt and Bruce Willis and everybody else did a fine job in they roles. The movie makes you feel dirty and unclean inside which is a good thing in the movie because the film is trying to get across how dark the world is.

Yet another inventive fantasy from Terry Gilliam, 12 Monkeys is the story of a prisoner in the future who volunteers to go back in time and gather information on a plague that wiped out the human race originating in modern day Philadelphia. Brad Pitt's idea of insanity seems to be to channel Dennis Hopper in Apocalypse Now after 3 gallons of espresso, but Bruce Willis gives easily one of his best performances as the man out of time, tortured by the burden of the knowledge of the deaths of 5 billion people he seems completely unable to prevent and fearing for his sanity. Madeleine Stowe displays her usual appealing combination of beauty and vulnerability and the future scenes show off some more excellent production design born of Gilliam's fantastic imagination. The story penned by one of …

The journey of James Cole (Willis) to find the truth with the aid of Dr. Kathryn Railly (Stowe). Jeffrey Goines (Pitt) befriends Cole who in turn believes he is the leader of the 12 Moneys who is responsible for the virus. I really enjoyed the performances of Pitt and Willis. Pitt not only his looks made him deranged, but his convincing portrayal was a treat while the character of Willis seemed puzzled because of the time travels involved. The confusing plot, rushed relationship of Kathryn and James, usage of other materials from other films just didn't appeal to me. There was a twist in the end, which only made the film's premise to be awkward after so much time traveling involved. A decent sci-fi movie, 12 Monkey's had sensational effects, wonderful performances and a subject …

It's Art I Tell You!

This movie is a piece of art in the ongoing timeline of a amazing cinematic masterpieces. It keeps you thinking throughout the movie, due to the complexity of the plot that evolves every five minutes into something completely new, and adds to the miraculous story.

James Cole ( Bruce Willis) Is a convict sent back to 1990 by scientists to figure out the cause of a deadly virus that will kill nearly everyone in the nearby future, 1997. The Suspect? THE CAUSE!? The Army of The Twelve Monkeys, an underground army formed to spread the virus.

The Acting is fairly well done by Willis and Pitt. Though Pitt doesn't have nearly as much screentime, he makes up for it by playing a COMPLETE Lunatic. He did it very well, But Im not sure if it was worthy of an oscar nomination for Best Supporting …

No posts have been made on this movie yet. Be the first to start talking about 12 Monkeys!