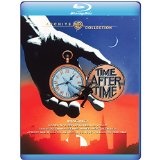 Plot: H. G. Wells pursues Jack the Ripper from the past to the future via a time machine. -- MaceeRae

Nicholas Meyer would later earn recognition for his work on several of the Star Trek films. But he cut his teeth with this wondrous and charming science fiction film. It works as several different stories in one entertaining narrative. It's a fish-out-of-water comedy, it's a social science fiction tale, it's a meet-cute romance, and a police procedural. Malcolm McDowell is amusingly likable in a rare heroic lead role as H.G. Wells. David Warner is quite sinister as the sadistic Jack the Ripper himself. Mary Steenburgen comes close to stealing the whole movie as the snarky love interest for H.G. Wells.

Vastly overlooked and underrated time traveling movie with a fantastically understated concept, Time after Time is an irresistible guilty pleasure. Pitting H.G Wells against Jack The Ripper in modern day San Francisco is an unmitigated stroke of genius and the references to a society, which is more akin to a disturbed serial killer, are clever and well constructed. The actors all seem to be having fun with their characters and any silliness soon evaporates into a sweet, romantic and atmospheric story that is as unpretentious as it is entertaining. Currently Time after Time is unavailable on DVD in the UK, a serious miscarriage of justice.

No posts have been made on this movie yet. Be the first to start talking about Time After Time!