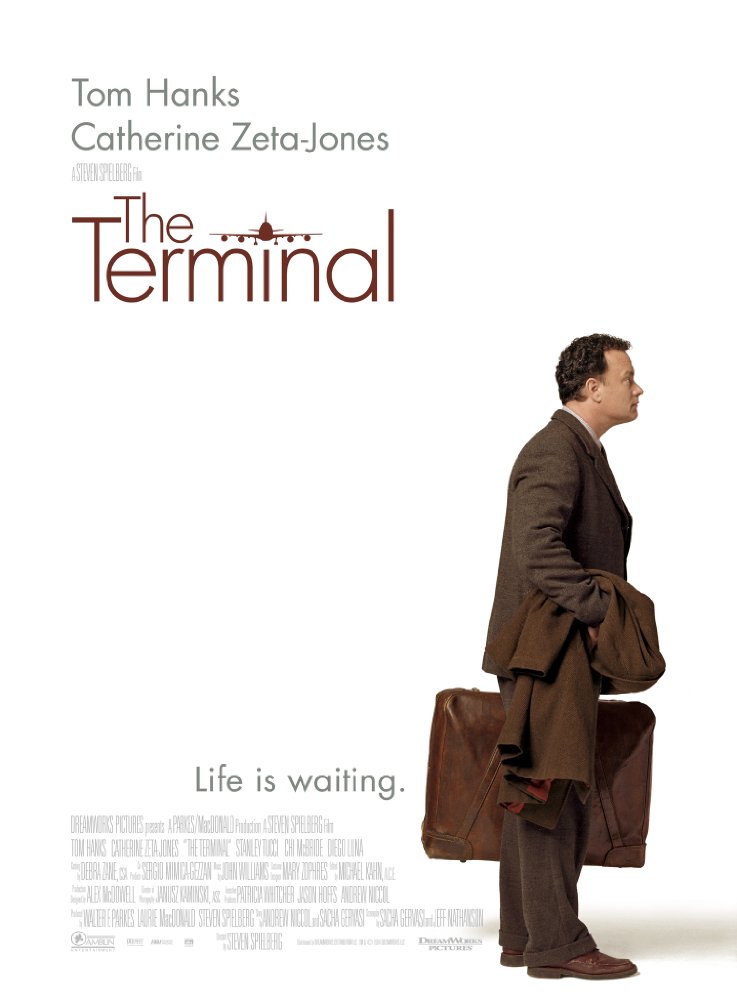 Plot: An American immigrant must take residence in JFK airport due to new regulations and his inability to communicate.

It's a sweet story, well-acted by Hanks and Zeta-Jones, and the shotwork by Spielberg is, as usual, impeccable. Have all the parties involved done far more moving, better work? Absolutely, but The Terminal is still a fun film, less flashy and in your face, but still eventually satisfying.

I would use the phrase 'terminally dull', but I've already used a similar phrase to describe 'Crimes and Misdemeanors' and I don't want to repeat myself. Suffice to say, this film is both bland and unremittingly sentimental, and the only thing I could take solace in was Spielberg's always competent direction.

It may be intentionally schmaltzy, but it's not without charm. Hard to buy Hanks as a foreigner. He does give an engaging performance, nonetheless. I enjoyed the comedy very much. The actors sell the cutesy romance to the point where it's not annoying. Entertaining enough.

This reviewer recalls enjoying this rom-com, which is a rarity coming from the director. The story of Viktor Navorski, (Tom Hanks), though fictional, was engaging and thoughtful from the get-go. It works because of a talented actor who portrays a sincere foreigner, a wonderful support played by Catherine Zeta-Jones and the rest, direction and screenplay was well executed. Some gags were too unbelievable, yet some were endearing. Overall, Hanks-Spielberg has pulled it off, a romantic comedy which touches on romance and going back to your origins. it may not be goundbreaking or memorable, it however pulls out your heartstrings because of the splendid character development, performances and cautious direction. The Terminal is worth viewing.

Viktor Navorski, (Tom Hanks) a citizen of the fictional republic of Krakozhia comes to America to accomplish one thing that his father has requested before he died but becomes stranded at the New York's JFK airport because his country's government is at war with the USA and so his visa and passport are no longer valid. The immigration officials refuse to admit or deport him so he is stuck in the transit lounge, and must survive as best he can. Eventually his honest nature wins him the trust and friendship of the airport workers. He even catches the eye of an air stewardess Amelia (Catherine Zeta-Jones) while struggling with the bureaucrats running the airport who conspire to deny him his chance to get out. Stanley Tucci plays the by-the-book JFK's Security Chief Frank Dixon. Funny and …

Tom Hanks is both funny and touching in this 2004 release. The terminal is about a man from the fictional country of Karkozia that is taken over by revolutionaries. Viktor Navorski (Hanks) is stuck in JFK airport because his his home country no longer is recognized by the U.S. so his passport and visa are no good. He can't return home because of the revolution and can't enter the U.S. because of the visa situation. What is created is a sometimes hilarious, sometimes thought provoking film that I was surprised that I enjoyed so much. Many reviewers compared Tom Hank's performance to that of Forrest Gump and I have to agree. He can take an out of the ordinary character and make him into someone we laugh WITH and not AT as so many people tend to do with those that are different. Check out …

No posts have been made on this movie yet. Be the first to start talking about The Terminal!