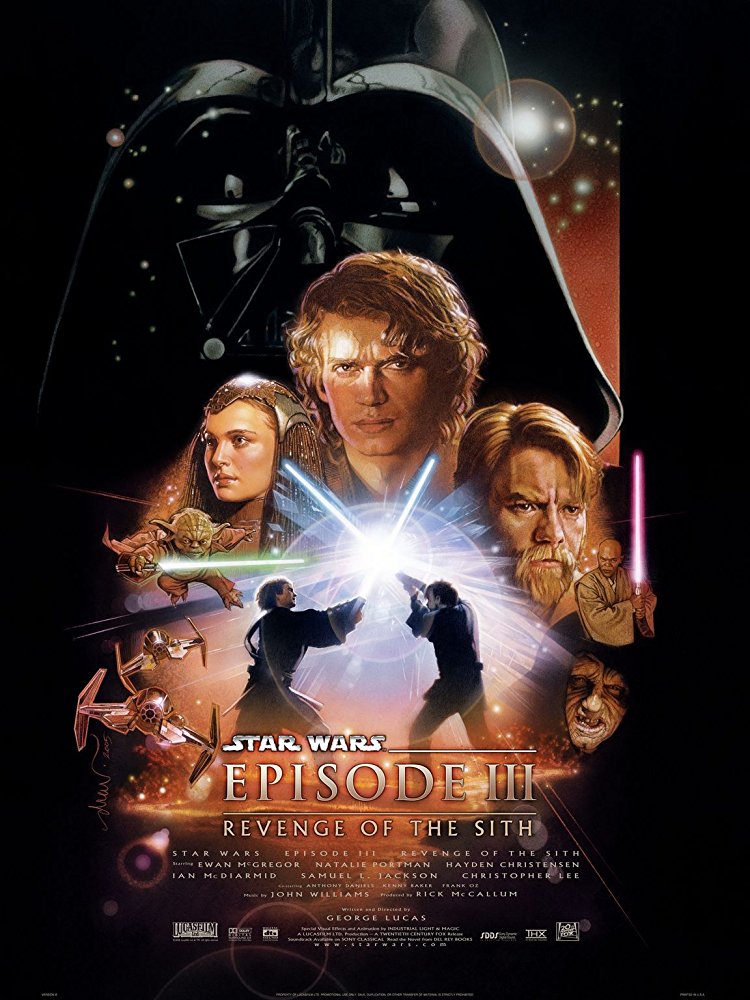 Plot: Anakin slowly goes to the dark side of The Force and becomes Sith Lord Darth Vader.

Anakin slowly goes to the dark side of The Force and becomes Sith Lord Darth Vader. "NOOOOOOO" that is the pussy line from the greatest villain of all time "Dark Vader". the visual effect's are good and the score is epic.

Although it still gives into dull acting and unnecessary CGI, Revenge of the Sith is, by far, the best of the Star Wars prequels. Riding high on the nostalgia factor, the film creates a compelling conclusion to Anakin Skywalker's character arc and features some fierce and violent action that is reminiscent of the darker parts of Empire and Jedi.

It's good movie, but not nearly as good as old star wars

Revenge of the siths

Epic space opera film written and directed by George Lucas. It is the sixth and final film released in the Star Wars saga and the third in terms of the series' internal chronology.
The film takes place three years after the onset of the Clone Wars. The Jedi Knights are spread out across the galaxy leading a massive clone army in the war against the Separatists. The Jedi Council dispatches Jedi Master Obi-Wan Kenobi to eliminate the evil General Grievous, leader of the Separatist Army. Meanwhile, Jedi Knight Anakin Skywalker, separated from Kenobi, his former master, grows close to Palpatine, the Chancellor of the Galactic Republic and, unbeknownst to the public, a Sith Lord. Their deepening friendship proves dangerous for the Jedi Order, the galaxy, and Anakin himself, who inevitably …

"Star Wars III: Revenge of the Sith" by Yojimbo

It's strange how expectation can colour your view of a film to such a degree; the first time I saw Episode III, I wasn't expecting much and I loved it. The second, I could not see past the glaring imperfections and hated it as a result. Seeing it from a more objective standpoint, Sith, although flawed, definitely does have some good qualities. The problems are still obvious. The opening act is still AWFUL, it's combination of weak quipping, slapstick and the baffling decision to make the main villains (ie the droid army) the comic relief - a decision that can only be justified if you are writing an episode of Road Runner - make the opening of the story look like a particularly childish and peurile cartoon. Things get much better as the mood darkens and elements of the story arc from the …

The best of the prequels (Episode I-III). Had a good plot but not enough for Anakin to turn to the dark side. They should have improved the character build-up instead of worrying about the effects. The fight scenes were really impressive and well coordinated. Natalie Portman and Ewan McGregor stretched their acting prowess on this one. Ian McDiarmid was splendid with the various roles he played. Unfortunately, you can never feel any remorse when Hayden Christensen portrays an angry Anakin. I felt the prequels as a whole could have been better if Lucas was behind the camera from the very beginning, then the quality of the films would be like this. Some coo lines: Palpatine - "It seems, in your anger, you killed her." Obi-Wan Kenobi - "You were the Chosen One! You were supposed to …

No posts have been made on this movie yet. Be the first to start talking about Star Wars: Episode III - Revenge of the Sith!