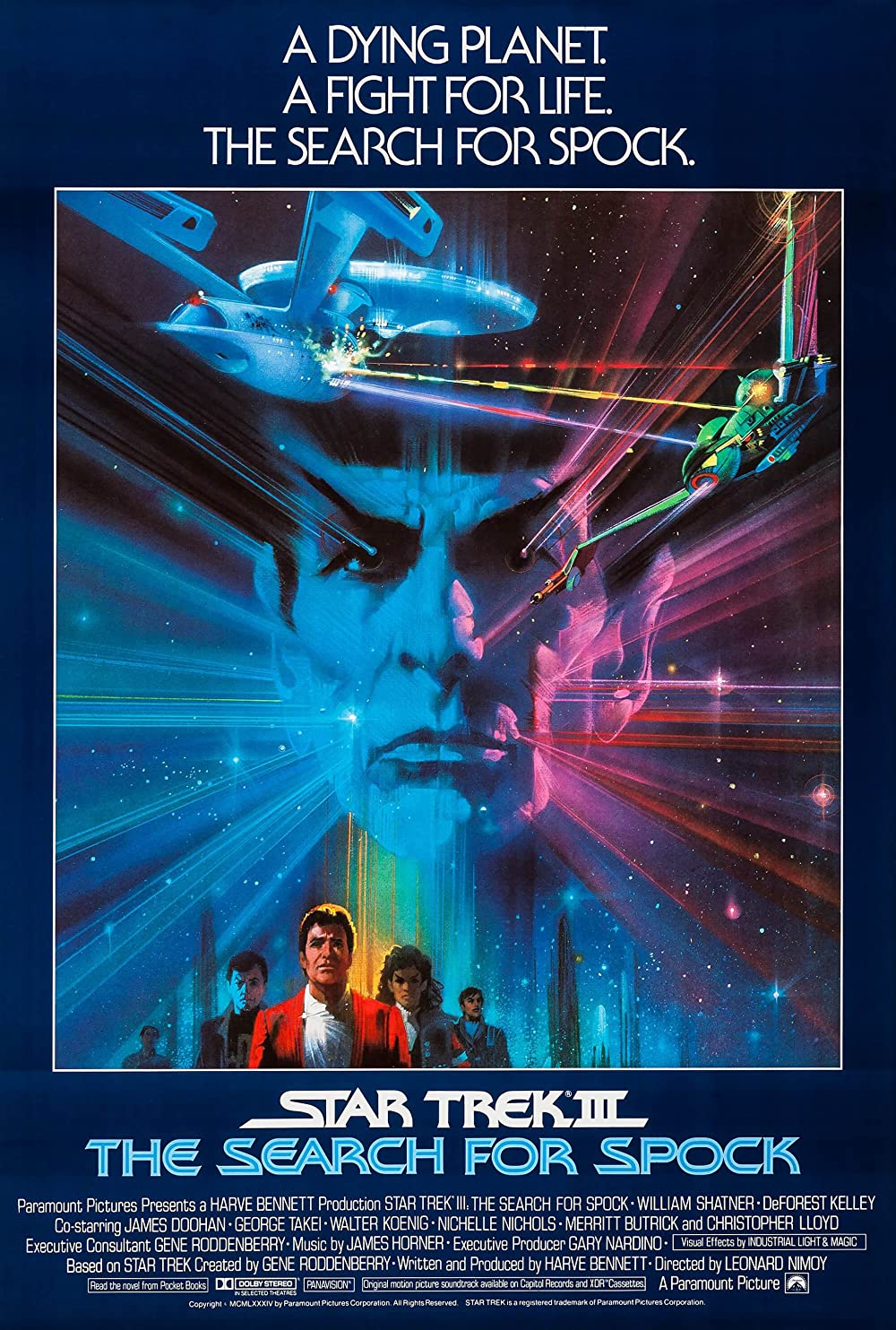 Plot: Kirk heads back to the forbidden planet Genesis in order to save Spock's soul. -- DB

This movie just goes to show what an important character Spock was to the series as a whole; he is essentially absent for most of the film and it really suffers for it.

Another of the better entries into the Trek series - even if this film feels like its spinning its wheels for the most part. While not as memorable as, say, Khan, it has its moments.

A great Trek flick that pivots on the relationships between Kirk-Spock-Bones. When Doctor McCoy begins exhibiting Spock-like characteristics, Kirk must break federation rules to save his two best friends.

Star Trek III: The Search for Spock comes right after what most trekkies and movie fans alike consider the best Star Trek film by far: Star Trek II: The Wrath of Kahn, and it precedes another one of the most highly regarded films in the series: Star Trek IV: The Voyage Home. The 3 films together make a trilogy of their own, while all the other movies are separate stories from each other. So in a way, this is sort of the Empire Strikes Back or Back to the Future II of this Spock trilogy...but it doesn't meet the standards of those films by any means. In fact, the only reason I probably give this movie any credit is because it's part of a bigger, better story.

To be honest, at of all 11 films, this is the one I have already forgotten the most. Yes, Insurrection is probably the most …

At the end of STAR TREK II: THE WRATH OF KHAN, one of the series' most beloved characters, the vulcan Spock, made a tragic sacrifice to save the Enterprise which cost him his life. However, even Leonard Nimoy (who simply IS the character) felt that fans were horrified at the fate of Spock, so he helmed this second sequel, aptly titled THE SEARCH FOR SPOCK. Even though the plot does not have the depth and sophistication of its predecessor and some scenes run longer than necessary, Nimoy compensates for this with some breathtaking action set pieces (the whole scene where Kirk and company steal the Enterprise and the climactic confrontation with a nasty Klingon commander--wonderfully played by Christopher Lloyd) and engrossing scenes of character development. Furthermore, the performances …

Not long after the funeral of "Spock" (Leonard Nimoy) and the reassignment of most of the "Enterprise" training crew, the Federation flag ship is on her way back to Spacedock for decommissioning.

"Chief Medical Officer Leonard McCoy" (the late DeForest Kelly) begins to show unusual signs that something is not right with him mentally. He appears to have taken characteristics from the late "Vulcan", and shows signs of stress.

On the "Genesis Planet," "Saavik" (Robin Curtis) and "Dr. David Marcus" (the late Merritt Butrick), both reassigned to the "U.S.S. Grissom," are studying the highly unstable "Genesis Planet" when an unusual life-reading is detected. On the planet, the two find a nine year old "Vulcan" male (Carl Steven) whom they determine to be "Spock." "Dr. Marcus" believes …

No posts have been made on this movie yet. Be the first to start talking about Star Trek III: The Search for Spock!