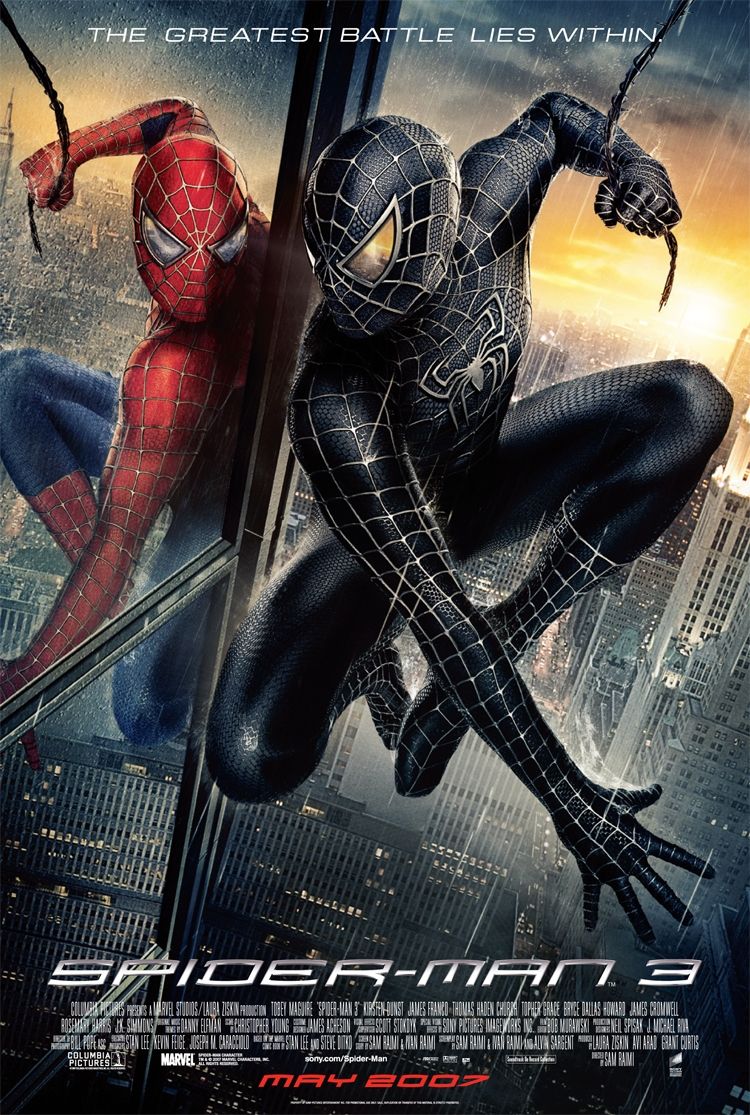 Plot: Everything has finally calmed down in Peter's life, and the city has learned to appreciate all he has done. All of this changes when Flint Marko escapes from prison and is in a freak accident turning him into Sandman. Peter finds out his connection with his uncles death and will not rest until he finds justice. But in revenge is a darkness and this darkness starts to take Peter Parker over.

Even though Spider Man 3 was not as good as the first two, I still want to thank Tobey Maguire and everyone else for putting out a lot of effort to give us an ending to the first Peter Parker.

If only they could've done a better job with Spider Man 3. It would've been up there together with Matrix as one of the few trilogies that didn't suck.

There are a couple of flaws with this film but I believe that they didn't entirely destroy the movie.

Harry loses his memory after attacking Peter and their friendship is seemingly restored leaving him free to hunt down the man truly responsible for Uncle Ben's death. However things are complicated by his transformation into The Sandman and the appearance of an alien creature that enhances Peter's negative emotions. There's actually a pretty decent sequel hidden inside the bloated, episodic mess that is Spider-man 3. Sam Raimi's presence at the helm is marred by his inability to resist the keys to the SFX toy shop but the cast are still likable, the comic relief (and JK Simmons in particular) is still funny and there's plenty of pacey action to maintain the attention. The big problem is with the script which relies far too much on contrivance and totally implausible coincidence. The most …

First, I must admit, I am not a fan of any of the Spider-Man films, however, this one takes the cake. I have seen bad movies, and usually I can find some sort of redeeming quality in them, but this was just awful. There was absolutely nothing good about this movie. The acting was second rate at best. I kept waiting for Tobey Maguire or Kirsten Dunst to break the fourth wall and ask, "UMM...What's my line here...Oh yea, good." And I can appreciate good visual effects, but this was ridiculous, it was way too many and way over-the-top. There was just no need for them. And what was the whole Saturday Night Feveresque montage sequence in the middle of the film about? It's Tobey Maguire walking down the street, strutting like he's '78 era John Travolta and then ends up in a club dancing …

Many flaws in Spidey's third

I very poor entry into the spider-man franchise. I will admittedly say that I did not like the first two as much as other people did but I did find them respectable enough. This one makes those two look quite brilliant. There are many problems to Spider-man three but let me say what are good. The special effects are great and the action scenes look good, also Bruce Campbell and J.K Simmons are amusing in their respective roles. Now the problems there are many first of all there are too many scenes of hitting you over the head emoting. Everyone does including Spider-Man and Sand-man. Second the film makes a fatal mistake in thinks that you care about Mary Jane played poorly in my opinion by the not very likable Kristin Dunst. The film relies on this and is hurt severely because of it. In …

No posts have been made on this movie yet. Be the first to start talking about Spider-Man 3!