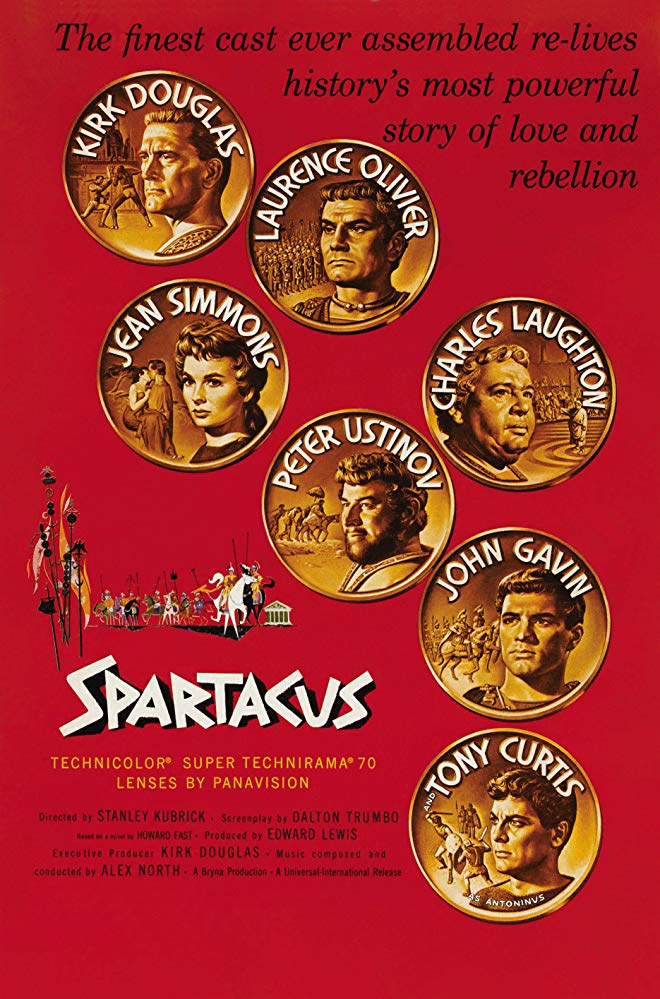 Plot: A slave by the name of Spartacus is trained like a gladiator only to escape to lead a revolt against the Romans.

A masterpiece of classic epic filmmaking. Establishing early Kubrick's style, Spartacus is a reminder towards the Hollywood of the modern era of what a work of art is. Grandiose epic proportions. 93/100

One of the better swords-and-sandals epics. It feels more satisfying and has a great ending. However, if you are looking for a good Kubrick film, this is not it.

A sprawling epic that does an excellent job of balancing extensive battle and action scenes with establishing believable and motivated characters. The ending is a true classic and Kirk Douglas dominates with charisma.

Despite its length, the movie entertains such as the moments of the actual battle, training the slaves and gladiators and more. One has to have the patience and focus though to truly appreciate the beauty of the film. Spartacus (Kirk Douglas) was selected to be a gladiator. Crassus (Laurence Olivier) buys a slave named Varinia (Jean Simmons). Excellent screenplay with lines from the hero: "I am not an animal" and "As long as we live we must stay true to ourselves." The romantic scenes and the discussion Crassus (Olivier) attempts to seduce his slave Antoninus (Curtis) slave slows the pace. The action, cinematography, score, location and costumes were fabulous. Kirk Douglas was perfect for the role while the rest provided solid support, even the thousands of extras utilized. …

Kirk Douglas stars as a gladiator who instigates a rebellion and forms an army of slaves to challenge the might of ancient Rome. The best of the swords and sandals epics, this is also probably Kubrick's most mainstream work although it still contains more adult material than most; the violence is relatively gruesome for something that has become accepted as a "matinee" style film and it tackles subjects that were taboo at the time (ie. the now notorious "oysters and snails" scene). It was obviously a big influence on Gladiator and like Scott's film contains some rousing action performed by a charismatic lead, skillfully intermingled with intriguing political machinations. The supporting cast is exceptional, featuring Lawrence Olivier, Charles Laughton and Peter Ustinov who all light up …

Not perfect or great but a good epic.

Spartacus is a good epic film that is good in some ways in lack luster in a few. The story line is interesting enough about the slave revolt even though there is not that much too it. The more interesting part for me was the roman politics scenes which were incredibly intriguing. The problems with the films I think are the actions in the revolt. The revolt is mostly talked about and the only battle shown looks good as it starts but ends oddly and abruptly. Still though a good epic and still entertaining to watch.

Oscar win Peter Ustinov 5/5 Best Supporting Actor- Peter Ustinov here does a lot more with a role that you would not expect anything from. He makes the slave owner interesting and funny where the character could have been absolutely nothing. He did an excellent job of making …

No posts have been made on this movie yet. Be the first to start talking about Spartacus!