Scent of a Woman Movie Information 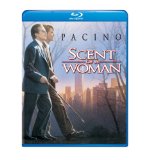 Plot: Charlie Simms (Chris O'Donnell), a prep student, "babysits" a blind, retired, Lieutenant Colonel Frank Slate (Al Pacino). Col. Slate has his own plans over the holiday, and Charlie is along for the ride of women, dancing, and a Colt .45. -- sberk44

Well crafted comedy-drama about the friendship formed between a college student (O'Donnell) and a blind veteran (Pacino). Pacino gives one of his best performances and Chris O'Donnell shows the acting chops that made him a promising up-and-coming actor in the 90s.

The film has a great story and fully developed characters. It also contains one of Pacino's best performances ever. A well deserved win for Best Actor. The blind colonel, is a truly memorable character. The speech he gives, in the films ending, delivers the right amount of inspiration.

This is one of Al Pacino's last great roles, before he became a caricature of himself. His nuanced Colonel Slate brings to life even the simplest of scenes in this powerful drama that focuses on the redemption of its two characters in vastly different ways. It is the believable relationship between Pacino and Chris O'Donnell's character that makes the film the successful emotional ride that it is.

No posts have been made on this movie yet. Be the first to start talking about Scent of a Woman!