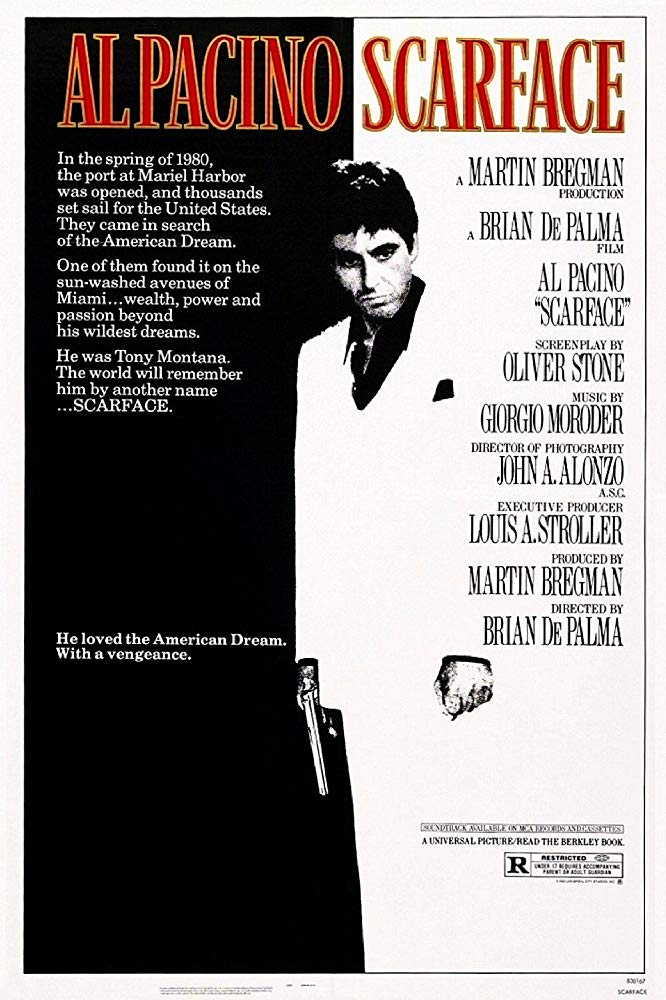 Plot: An illegal Cuban immigrant greedily takes control of the drug land in Florida, where he faces crime corruption, and police infiltration.

Starring Al Pacino in what's probably his most recognizable role, "Scarface" is both great and iconic.

This is a perfect example of an overrated film. It is the tried and true tale of a rise of a powerful drug lord. Eventually his empire unravels and he falls in spectacular fashion. There is nothing particularly noteworthy about any of it. This is a movie a lot of people like because it's "cool to like Scarface." It has been ripped off countless times as well, see Blow, Wolf of Wall Street, Empire, etc...

If you're looking for the most overrated film, your search is over. Scarface (1983) is extremely poorly edited, cast, acted, and overlong. Okay, so I am supposed to wait nearly 3 flippin hours to hear the only line people quote from this film, "Say hello to my little friend!"? This line is not even tangible to any type of realistic or cinematic situation! Hell, even the way Al Pacino delivers the line is pretty lame and its comes off as simply silly! This movie is overly anticlimactic in every sense of the word. I honestly don't know how this movie made it so big other than the fact that it is inspired by true events. But you know what Hollywood, every movie is inspired by true events, so I just destroyed the meaning of that description in this very review.

A Detriment to the Crime Thriller

This will probably be my most disagreed with review on the site, but I don't care. This movie was horrible. I couldn't stand it. Truly can't believe the attention this movie got. Al Pacino was horrible in this movie. I think everybody involved in the movie got to far into the roles by blowing so much coke and producing this garbage....... with that said I will tell you why I hate it.

This movie is comical at best. All characters are caricature-like, I felt like this was a parody movie on gangster movies. Al Pacino ate the entire set with the most over-acting I have ever seen performed on such a highly acclaimed movie. The movie has no brain or depth. It is 3-hours of cliche' scenes and quotes for wanna-be thugs to quote and idolize. The final scene is not good. It is not. I felt like …

Let me know if you want info on local theater locations or where to buy tickets.

Yeah I saw that when I saw Rise of the Planet of the Apes. That would be bad ass to see it in the theater again.

Scarface is back in theaters
nationwide for one-night only on August 31! The film is digitally resorted and
includes a mini featurette that will include interviews with popular filmmakers
and talent on how this cult classic has influenced society and filmmaking
through the years.