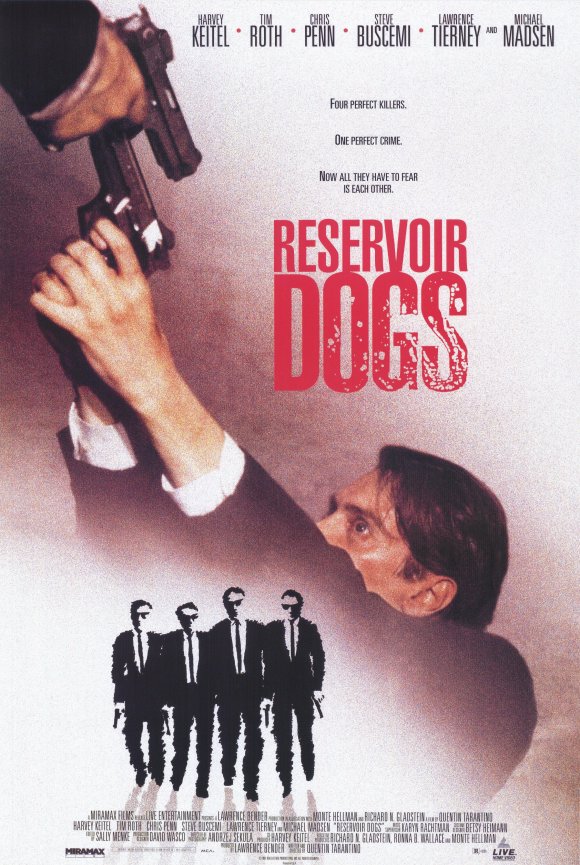 Plot: Strangers, who don't know each other's name, team up to commit a heist, while one of them is rat. They struggle to figure out who it is, while they argue and almost kill the wrong men.

Quentin Tarantino's debut as director foreshadows the gritty thrill rides he would later give to the world of cinema.

Not Tarantino's best film, but a brilliant directorial debut from a director who's among the best of all time. Perfectly acted, well written, and stylish, RD is a film that cannot be missed. A lot of this film reminded me a lot of 12 Angry Men because much of the film focuses on men talking in an empty warehouse, yet each scene was intense with riveting dialogue. "Are you going to bark all day little doggy, or are you going to bite?" "Why am I Mr. Pink?...Because you're a f***ing fag!!"

"Are you gonna bark all day, little doggy? Or, are you gonna bite?&#65279; I use to dislike this movie as I was too young for it, but now on a second watch years later, I absolutely loved it. I really have evolved as a specie. The dialogue, acting, directing, music and the ending. What's not to like. Also major praise to Tim Roth, who spends most of the movie on the floor dying and crying in pain while drenched in fake blood.

One of the best of all time!

One thing this Tarantino classic is brilliant for is the script alone. Tarantino is by far the best in the business when it comes to on screen charectors and written dialogue! Reservoir Dogs is excellent proof of that and is one of the best casted movies that i can remember in a long time. Chris Penn (rip) who i thought wasn't that great of an actor during his short lived career, however he was brilliant as well. If you have never seen any of Tarantino's work, then i definatly suggest starting here as it will only leave you either wanting more or not. You see you either love Quentin or you dont their doesnt seem to be any inbetween. I myself before seeing this for the first time (RD was my very first Tarantino film ) did not like to sit through films that were heavy in dialogue as i …

At the beginning of the nineties, Kurt Cobain and Nirvana looked in disgust at the formulaic, soulless lumbering cash cow guitar music had become and using cues from grittier, purer classics of the past singlehandedly swept away the self serving excesses of the genre and revolutionised it forever. Quentin Tarantino did exactly the same thing with cinematic crime drama. He examined the logistics of both being an undercover cop and planning a heist and introduced believable characters who spoke like real people; they weren't just posturing stereotypes punctuating another set of pointless explosions and car chases. He created an ensemble cast of actors for their charisma and ability, not their box office drawing power. He scored it with wit using obscure music from the past that …

No posts have been made on this movie yet. Be the first to start talking about Reservoir Dogs!