Requiem for a Dream Movie Information 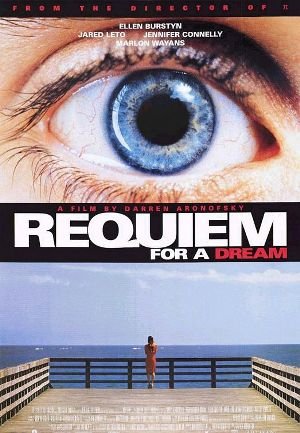 Plot: Four normal people are addicted to drugs in different ways. When it comes down to it, they struggle to survive after their once great high.

With dark and unsettling imagery, "Requiem for a Dream" will get to you one way or another.

This is why I don't do drugs.

A very intense, extremely sad story, or rather, two stories. I found the mother's downward spiral the hardest to witness, hearing her talk about how she was going to be on television became strangely disturbing and heartbreaking. All of these characters lives' are so tightly wound around drugs that eventually the binding had to snap or they had to.

Darren Aronofsky rarely disappoints, and with Requiem for a Dream, he has created another movie that successfully encourages you not to do drugs. While I do not consider it his best work, it definitely comes from the heart and means something.

Ellen Burstyn is outstanding as the weight-loss obsessed aging mother Sara. There is a scene in the film, where she reveals her addiction to her son Harry. Her acting alone in those few minutes is some of the best I've ever seen.
Aronofsky's direction is great as always. His production design and the way he filmed it through glossy focus lenses is excellent.
He brings his point across very well about the disadvantages of narcotics, - legal and illegal - but it isn't a message stuffed down your throat. He just shows side-effects and personal …

Aronofsky's best in my opinion!!

Was time once again to watch this awesome film that was directed by Darren Aronofsky. I must say this is one of those movies that i can watch 100 times over and never get sick of it. Tne story of 4 people who are co dependants of different forms...drugs and eating disorders who all find out that after achieving the great highs their is always the crashing lows. Great cast includes the always great Ellen Burstyn (who if you asked me got totally robbed by Julia Roberts in Erin Brokovich that year in the oscars) Jared Leto, Jennifer Connelly, Marlon Wayans. Aronofsky never even recieved a nod for best direction (Which in my opinion is a crime) And this all is backed by an amazing soundtrack by the Kronos Quartet (Another miss at the 73rd Academy Awards).

All these things i have …

A Difficult Watch for a Great Movie

An extremely terrifying and dark movie. This movie does, what I suppose to be, a great job looking into addiction and its victims. Every character is hauntingly believable and realistic. Jennifer Connelly deserves credit for a good performance and for acting in some disturbing events. Leto is a user of drugs, but more so a user of people. As his addiction gets worse he steam rolls everybody around him to make sure he can sustain his high at all periods. What he subjects his girlfriend to is disgusting and sickening. The plight of Wayans character wasn't felt as much. as the script almost had him as a secondary story line to the other three. Nobody's story is more horrifying and heart wrenching as the of Burstyn's character. Ahead of its time, this movie …

No posts have been made on this movie yet. Be the first to start talking about Requiem for a Dream!