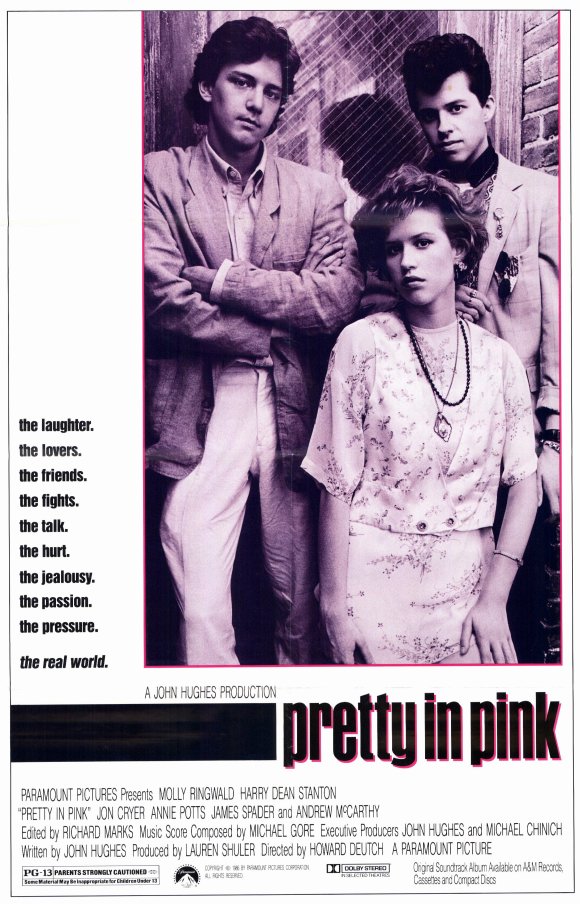 Plot: A working class high school girl gets romantically involved with a rich boy. Meanwhile, another boy is crushing on her. -- sapien

Andie Walsh (Molly Ringwald) has eyes for the prominent Blane McDonough (Andrew McCarthy). Andie's friend Phil "Duckie" Dale (Jon Cryer) has a crush on her. The two argue since Duckie gives her advise. This cast was much better than Sixteen Candles, had better humor and screenplay. Its premise was more realistic and the performances were sincere. The picture also boasts one of the best soundtracks in its era. Pretty in Pink was effective in bringing in the laughs and drama.

Another good teen movie from John Hughes. I don't like it as much as his other teen films, but I do still enjoy it.

I much prefer Breakfast Club or Sixteen Candles to Pretty in Pink. Can't put my finger on why this doesn't have the same impact, but it just doesn't. Still, should be watched by all fans of the 80s.

Could have been better

*sigh* This could have been such a great movie. The cast was good, the story was typical John Hughes and it was perfect 80's but something went wrong. (Spoilers ahead!!) In the original cut, Andy was supposed to end up with Duckie but test audiences didn't like that so she ended up with Blane. And it totally does't work! The whole movie is done so that you really like Duckie and don't like the way Blane treats Andy and yet she ends up with him and that just never sat right with me, it doesn't feel right. (End of spoilers)

But, despite that, the performances are good and the characters are fun and much like Hughes' other concoctions. It's obviously dated but in a good, 80's way and the soundtrack is very of the time. It's not one of my favourite Hughes movies but it is still worth …

No posts have been made on this movie yet. Be the first to start talking about Pretty in Pink!