Pirates of the Caribbean: The Curse of the Black Pearl Movie Information 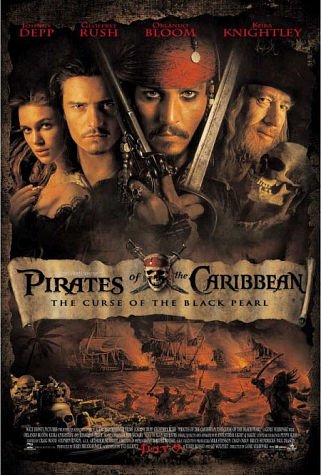 Plot: A black smith teams goes on an adventure Pirate Jack Sparrow as they are chased after by Jack's old pirate buddies.

One Of The Best Of The 2000âs Curse Of The Black Pearl is Hilarious, Lovable, Memorable, Brilliantly acted (Depp as Jack is one of the absolute best casting choices ever), Epic, and at times Spooky. Rating: Fresh

The actors' performances are charismatic and the story is as grand scale as the settings.

A black smith teams goes on an adventure Pirate Jack Sparrow as they are chased after by Jack's old pirate buddies. 2003 was a great year for movies because lord of the rings, kill bill, and this fun and amazing movie knowed as Pirates of the carribbean.

When I first read "Pirates of the Caribbean" is from the producers of "Armageddon" and "Pearl Harbour" I thought: "No, I never gonna watch this movie!" Well, things have gone far...

There are a lot of pirate movie which were blockbusters but didn't enjoy me. "Pirates of the Caribbean" was just awesome. The script is very good and is filled up with great jokes which always made me laugh. Johnny Depp is just wonderful in this movie, the Academy Award nomination was justifying, well we all heard that he wanted the movie to had funny elements because he wanted his kids to watch it. And it really went that way. You can see how he was enjoying taking part in this movie.
Orlando Bloom... well he did a good job in this movie but let's don't talk about the sequels.
Geoffrey Rush, Keira …

What a Swashbuckling Adventure!

Despite the fact that The Pirates of the Caribbean movies seem to get worse with every entry, itâs still one of my favorite modern day franchises. In a cinematic world filled with Transformers and Superheroes itâs actually quite refreshing to have a series of films that focus more on swashbuckling adventure then giant robots or men in tights.

The Curse of the Black Pearl is easily the best of the series. It has a very long run time, but doesnât feel like it. It really is the magic of the world that pulls you in on this one. Most time piece movies nowadays are serious dramas (or awful like the recent Three Musketeers re-make.) but to have a rousing action/adventure set in a different age makes the mundane seem more magical, and the magical aspects of the film seem …

The Curse of the Black Pearl is the first installment in the Pirates of the Caribbean stories. It is a hugely entertaining, comedy-cum-action-cum-horror romp, starring Johnny Depp, arguably the finest Hollywood actor of his generation and his character (Jack Sparrow) is one of the most memorable and fascinating characters ever. We catch our first glimpse of Jack standing proudly atop the mast of his vessel as it sails into Port Royal, hair rustling in the wind. Then a couple shots later, it's revealed that Jack's "ship" is a battered dingy so full of leaks that it makes the last several feet into port mostly submerged.

The story centers on this lone pirate on the Caribbean Sea, looking for his lost ship, the Black Pearl which was commandeered years earlier by Captain Barbossa …

No posts have been made on this movie yet. Be the first to start talking about Pirates of the Caribbean: The Curse of the Black Pearl!