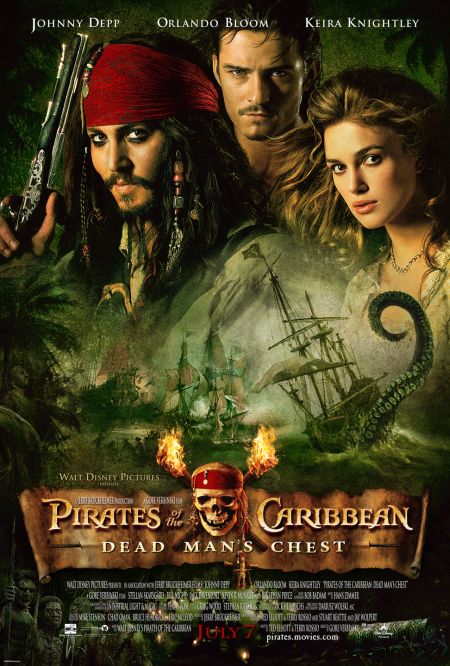 Plot: Jack Sparrow's debt to Davy Jones is due, but, with a little help from his friends, he hopes to do the impossible and escape his fate.

It's quite a ways off from living up to "Curse of the Black Pearl."

Jack Sparrow's debt to Davy Jones is due, but, with a little help from his friends, he hopes to do the impossible and escape his fate. this movie was hated by critics and some people but this movie was fun to watch and better then the third one.

The magic of the first film evaporates as the plot gets more complex and the fun characters get overshadowed by special effects sequences. Johnny Depp's Captain Jack Sparrow still owns every frame of film he occupies, but the other characters are often pushed aside for extended battle sequences and sea monsters. Still a rush, but imperfect.

Blockbuster sequels are ALL guilty of the same cinematic crimes. They are completely self referential and rarely bring anything new to the original idea. They're too long. The scripts are totally episodic and have far more interest in ever escalating set pieces than the story or characters. They rely far too much on CGI. And so it is with Dead Man's Chest. I personally thought the supernatural element was the weakest aspect of the original film and would have preferred to see a straight swashbuckling adventure with more of Captain Jack's dubious morality and witty dialogue at the centre. But that would've taken screen time away from the expensive CGI, wouldn't it...? Tsk tsk. In fact much of this film reminded me of a Pixar cartoon, with much of the same kind of humour and sight gags; …

Just As Good As The First

This film is very similar to the first film. I refer to the flaws, the strengths, and in essence, everything that has to do with the first film. This is not good, nor bad. The first movie was an enjoyable rumpus, but it was filled with flaws and holes. This film was no different, but it balances out as being nearly as good, if not equal to the first.

This time however, I was entertained a little bit more the rest of the way through. The first half hour wasn't as strong as the first film's beginning, but it makes up for it with …

Captain Jack Sparrow (Depp) is approached by Will's father Bootstrap Bill Turner and informs him that Davy Jonesâ pet will yank him to Davy Jones' Locker. Will Turner (Bloom) is captured by a Pelegostos tribe and explains that Elizabeth (Knightly) needs to be rescued after her marriage was interrupted. Davy Jones asks Sparrow for 99 souls in 3 days. One of many preposterous scenes were Jack falling several feet from above and landing on his back uninjured, unnecessary bar fight sequence and a father seeing his son being tortured without acting upon it. The effects, costumes and action were breathtaking. Its plot and pace of storytelling was confusing and slow. Pirates of the Caribbean: Dead Man's Chest was a decent follow-up with more characters and conclusion that hints of …

No posts have been made on this movie yet. Be the first to start talking about Pirates of the Caribbean: Dead Man's Chest!