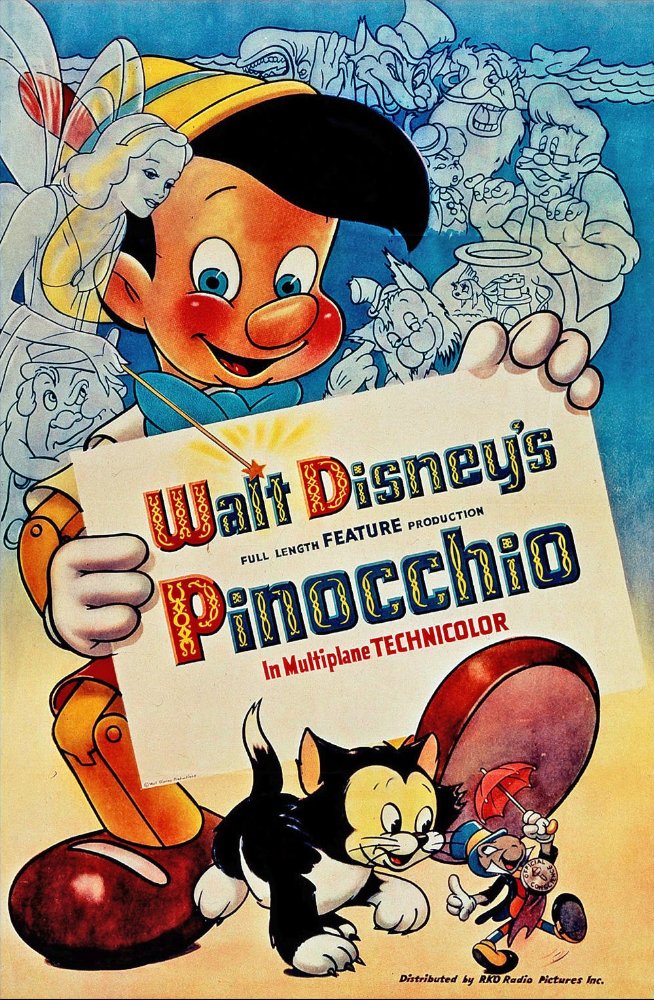 Plot: A man named Geppetto wishes his puppet Pinocchio were a real boy.

A man named Geppetto wishes his puppet Pinocchio were a real boy. This movie is a childhood favorite from me and this movie is really hard to hate this master peace.

Magically joyfull and, at times, emotional. A great adventure fable that showcases the very best of Disney.

"What does an actor want with a conscience, anyway?" Viewing this movie again after several years with my kid, Saw this a young boy and was truly fascinated by the animation. Geppetto (Christian Rub) has a wooden boy puppet named Pinocchio (Dickie Jones) and cares for Figaro and Cleo, cat and goldfih respectively. As narrated by a charming cricket named Jiminy Cricket (Cliff Edwards), Geppetto wishes for his puppet to become a real boy and afterwhich a Blue Fairy (Evelyn Venable) enters and makes him come to life. Pinocchio meets certain influencers such as Honest John and Gideon.

The animation for its era was spectacular, voice acting enjoyable and the songs iconic and deservedly awarded such as "When you wish upon a star." It's screenplay was likewise provocative with lines: …

I doubt Disney would ever produce anything like Pinocchio these days. Disney isn't gutsy enough. To be honest, I still don't know how this got into theaters. Disney scarcely ever makes a film as subtly dark as this. On the surface, Pinocchio is a typical Disney children's film, but underneath, Pinocchio boasts a variety of dark themes that work like a charm. It's a shame Disney will likely never make something like Pinocchio again, because it's just so good.

Pinocchio is a very strange story. Even stranger than I originally anticipated. Geppetto, a wood carver, was quite pleased when he was finished with his wooden puppet, Pinocchio. He was even more pleased when it turned into a real boy. And with Jiminy Cricket as Pinocchio's conscience, what could go wrong? Well, a lot. …

On Disney's second venture into their newfound form of feature-length animation, they brought forth an even more vivid, and much more morally-driven story, creating a true masterpiece with some rather prominent faults.

Pinocchio tells the story of an elderly craftsman who's only wish in life is to have a son of his own. He wants this so much that one night he wishes upon a star that his newest creation, a marionette of a young boy, would come to life. Lo and behold, his wish comes true as the puppet starts walking a talking, but he is only allowed to become a real boy if he can prove himself an upstanding, moral citizen of society. For help along the way, he has his self-proclaimed conscience, a little cricket named Jiminy.

After the success of Snow White and the Seven Dwarfs, …

No posts have been made on this movie yet. Be the first to start talking about Pinocchio!