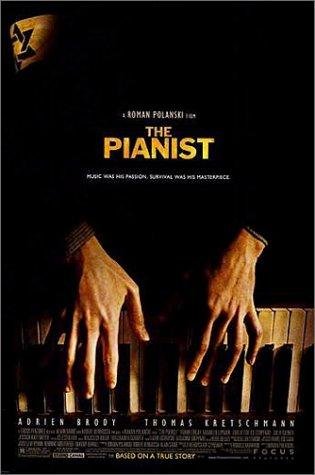 Plot: A Jewish pianist must flee is home country as Germany invades. He is reluctant to flee and struggles to survive because of it.

I watched this movie awhile ago and afterwards I thought it was a masterpiece. Just today I re-watched The Pianist and my thoughts have changed. There's no doubt Brody gave a great performance, the middle of the movie dragged but still good movie solid B 3/4. Not the type of movie to watch often.

The film is about a Jewish pianist must flee is home country as Germany invades. He is reluctant to flee and struggles to survive because of it. The acting in this film was outstanding, some of the scenes in this movie are shocking and heartbreaking.

"The Pianist" by Yojimbo

Roman Polanski directs the harrowing story of Wladyslaw Szpilman, a Polish pianist and Jew who survived the horrors of the holocaust in WWII. Adrian Brody' performance is the centrepiece as it is a very personal journey as you watch with despair and revulsion as Polish jews are stripped of their livelihoods, their rights and their dignity by a brutally oppressive regime. It's unusual in that rather telling the story of a man involved in a war, it's more of a spectator's point of view; in fact the later scenes in which Brody is entirely alone, disheveled and scavenging for food in a decimated wasteland feel a little sterile. The absence of human interaction means it lacks the emotional impact of something like Schindler's List, but it is a shocking and horrifying tale, made all the more …

W&#322;adys&#322;aw Szpilman (Adrien Brody), a famous Polish Jewish pianist working for Warsaw Radio, sees the whole world disintegrate with the Invasion of Poland on 1 September 1939. When the German Army enters Warsaw, living conditions for the Jewish population has worsened, with daily massacres. Szpilman is saved at the last moment by one of the Jewish Ghetto Police, who happens to be a family friend. Wladyslaw asks Majorek a favor to escape and plans of fighting back. The Gestapo discovers the weapons.

This biographical war film has excellent screenplay with professional artists. Brodyâs portrayal of Szpilman was astonishing. Its realistic directing, authentic set locations, score was applicable to each particular frame. Some of the quotes include: Majorek â âItâs …

THE PIANIST is the emotionally devastating true story of Wladyslaw Szpilman (Adrien Brody), a Jewish pianist in Poland caught up in the horrors of World War II. The Nazis invade Poland, confine the Jews to ghettos then ship them off to concentration camps. This has to be one of the most honest films about the holocaust. The film is amazingly well done and director Roman Polanski delivers the epic journey of a man who is transformed by a series of events from an well-dressed, highly cultured musician to a scavenging, hollow shell of a human being in a very thoughtful, skillful way.

This an excellent look at the Holocaust through a Jewish man's eyes, but I can see how the violence could be upsetting to some viewers. The violence is heartbreaking and graphic with showing the widespread …

No posts have been made on this movie yet. Be the first to start talking about The Pianist!