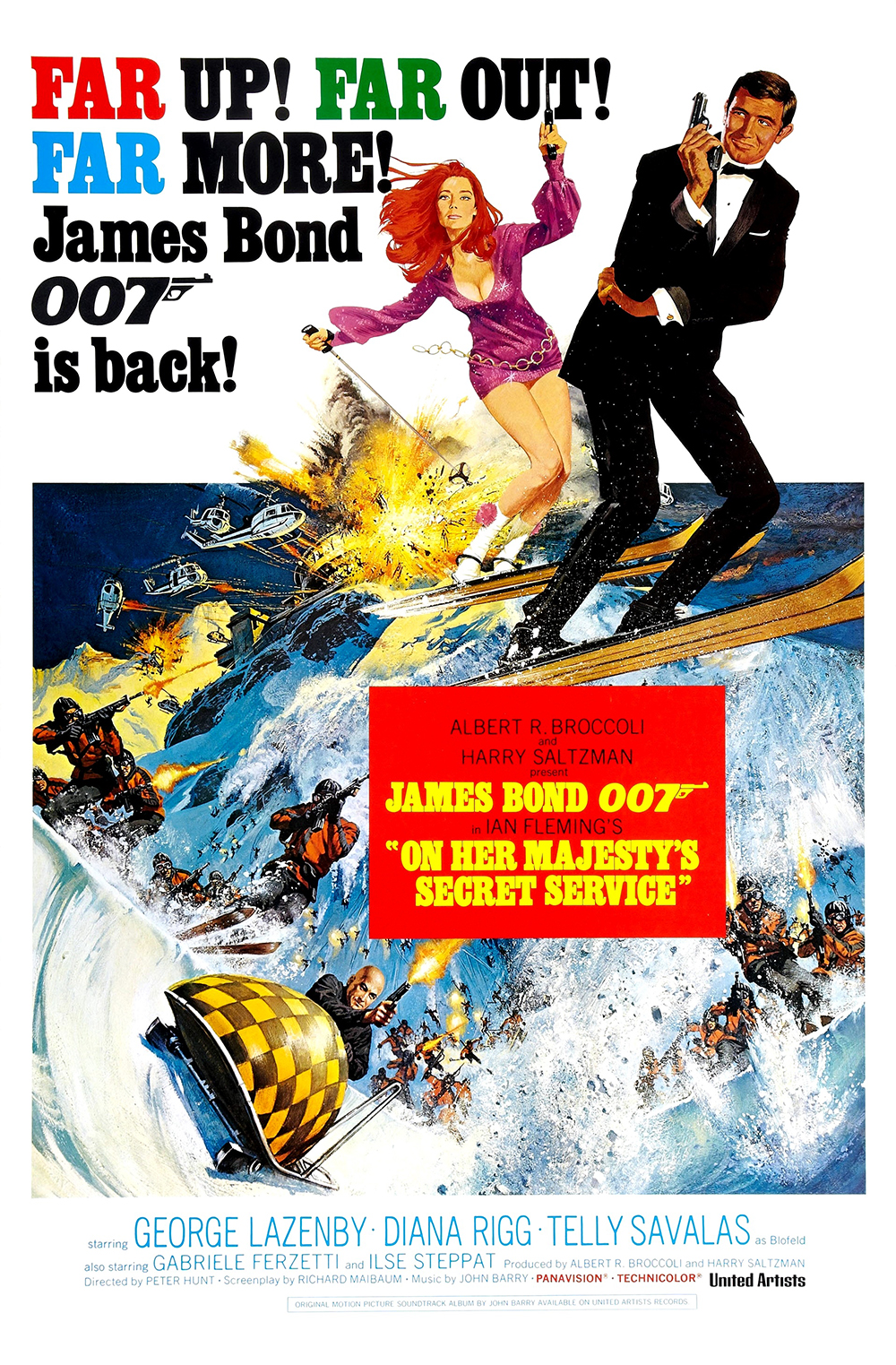 Plot: George Lazenby steps into the role of James Bond. Blofeld plans to spread a deadly virus across the world. Bond teams up with an Italian gangster to thwart SPECTRE. In the end, Bond loses his wife.

George Lazenby, who bears the distinction of leading one and only one film in the franchise, plays a more modest James Bond in a much subtler adventure than we've seen in the past.

I finally saw this after having heard it maligned for so long. I actually liked it better than some of the absurd special effects laden Bond films. Can't say I adored Lazenby Bond, but he wasn't as bad as I'd been led to believe. This one actually feels somewhat European and almost believable.

James Bond saves Contessa Teresa "Tracy" di Vicenzo from drowning. This flick had a few coincidences like Tracy spotting Bond in a skating rink or Ernst Stavro Blofeld's knowing where they were. It tends to drag in the middle and only picks up during the ski scenes, avalanche and rescuing Tracy. Blofeld was never caught and vows revenge on Bond with a shocking conclusion. George Lazenby lifeless acting coupled with a few bad editing just didn't impress this reviewer. The passion of the main figure was present but is overshadowed by the lack of a decent plot and exciting action sequences. On Her Majesty's Secret Service lacked the coolness and gadgets that make a good Bond movie.

"On Her Majesty's Secret Service" by Yojimbo

George Lazenby takes over the role of Bond from Sean Connery and he is, frankly, terrible. He delivers dreadfully cheesy one-liners with none of the suave wit of his predecessor and has a level of woodenness that would make Roger Moore blush. Technically, things are no better; the direction is hopelessly amateurish, which combines with a corny script and matter of fact sexism that makes it all feel like an episode of The Persuaders or similar. In fact the risque sexuality of Bond descends to the level of a Carry On film during a painful sequence in which Lazenby resembles a kilted Blue Peter presenter. The film's only saving graces are John Barry's score and the pure charisma and sex appeal of co-star Diana Rigg. Otherwise it's a waste of an extremely long running time that ranks …

"This never happened to the other fellow".

"On Her Majesty's Secret Service" marks the sixth film in the Bond series and the first without the great Sean Connery. I was very curious as to how George Lazenby would hold up as James Bond, and I must concede that although he was passable, this Australian model lacks the charisma, macho coolness and humor of Connery.

Telly Savalas puts in a surprisingly good turn as the evil and menacing maniac genius Ernst Stavro Blofeld who is brainwashing and programming people to spread diseases throughout the twelve major countries of the world and Diana Rigg is superb as the self reliant gorgeous and witty Contessa.

No posts have been made on this movie yet. Be the first to start talking about On Her Majesty's Secret Service!