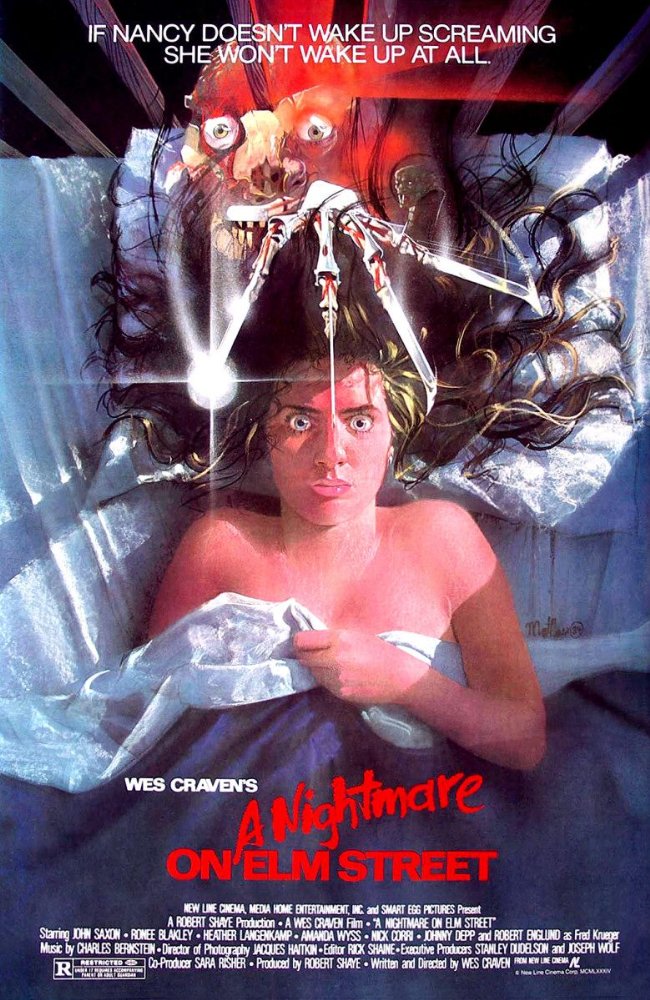 Plot: A dead serial child molester haunts a teenagers on Elm st. in their dreams. Don't fall asleep of or Freddy will come for you.

A Nightmare on Elm Street has earned a sterling reputation as one of the best horror films ever made. Itâs certainly one of the most original in terms of its premise. A serial killer who invades your dreams? Amazing. The first film itself has that to its advantage. The Freudian overtones and creepy sexual predatory vibe conveyed by Freddy Kruger does make him an imposing villain. Robert Englundâs performance is effective. The movie itself is more strange than scary. The ending is trying to be crafty but itâs more frustrating. First time viewers may be surprised by the darker tone compared with the sequels and parodies. Freddy Krueger is not played for laughs much here, heâs quite frightening.

"A Nightmare on Elm Street" may be more iconic than 'great,' but it's terrifyingly original, unpredictable, and like other horror classics like "Jaws," plays on paranoia, making you less afraid of what you see and more afraid of what's lurking out of view.

"One, Two....Freddy's Coming for You!!! Three, Four....Better Lock Your Door!!! Five, Six....Grab Your Crucifix!!! Seven, Eight....Better Stay Up Late!!! Nine, Ten.....Never...Sleep Again!!!" This movie was Scary and really chilling. The visual effect's in the movie may be out of date but it's still well put together and frighting.

"Whatever you do, don't fall asleep."

Wes Craven had already shocked and repulsed audiences with his controversial Last House on the Left (1973) which was a semi remake of Ingmar Bergman's The Virgin Spring (1960). He had also introduced cannibalistic in-breds in the cult classic "The Hills Have Eyes (1977) before hitting pay-dirt with the introduction of deformed and psychotic child murderer Freddy Krueger.
A Nightmare on Elm Street followed a similar plotline to Halloween and Friday the 13th in the fact that American teenagers are brutally hunted down and murdered by a lone madman.
Nightmare is a simplistic, dare I say it formulaic movie which transcends its low budget slasher roots. It has an innovative style, a likeable cast and a villain who has gone down in movie history.
Toying with any number of sub texts, this is …

PROS:
A Nightmare on Elm Street surely delivers what I beyond expected. Robert Englund's performance as Freddy Krueger was creepy, scary and quite frankly, funny. This was the point that made me love 'Nightmare. Heather Langenkamp delivered a great performance as Nancy Thompson; one of the greatest heroines in film history; so to speak. The plot seemed to be very simple and that was great for me. It was easy to follow and the scares distracted me from it. Wes Craven's creativity surely is shown on the screen. It may be twenty-so years old but it is still great fun to watch; especially the blood geyser sequence.

CONS:
The special effects were and still are pretty standard but with the budget they had; it shows you can make realistic effects with a small amount of money. …

This is definitely one of the more interesting horror flicks that came out of the 1980âs because of its intriguing idea of a maniac killing people in their dreams. Although it did have funny moments because of the ridiculous, somewhat upbeat soundtrack and some of the decisions that the characters make, there are a plethora of truly horrifying scenes. Some stand-outs include Fred Kruegerâs first kill, the school haunting, and the bedroom blood flood. For a cast of mostly unknown actors (like Johnny Depp), the acting is credible despite the occassional slip-ups. The special and visual effects are not first-rate but all of it works because the real terror lies in the concept. For me, the factor that makes this film superior than typical slasher movie like the âFriday the 13thâ …

No posts have been made on this movie yet. Be the first to start talking about A Nightmare on Elm Street!