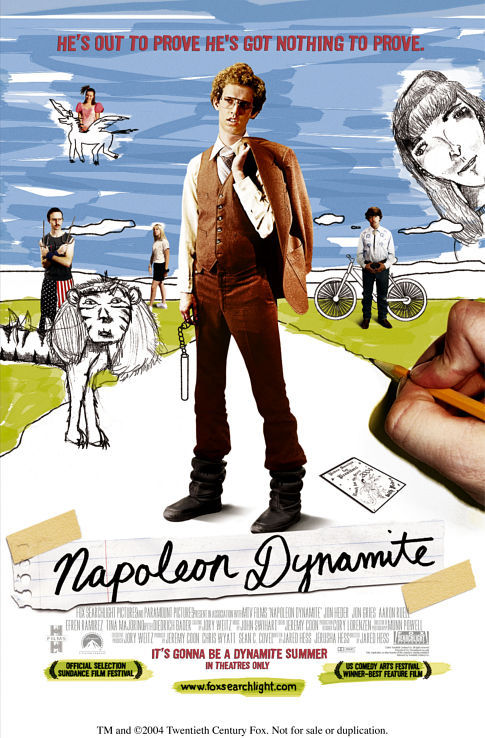 The "Seinfeld" of movies. It's title character is so likable and that alone makes the film enjoyable to watch.

The story is about a unpopular high school student tries to help his friend become class president. This movie has good writng and funny parts.

I had my doubts because even though this is a popular movie it looked really stupid. It actually turned out a good film. Napoleon is funny once you get used to his character. I'd watch it again. It does have somewhat of a story line too so it's not just a bunch of random comedic acts.

Funny, uplifting and refreshing look at high-school. A unique and weird direction from MTV films. An odd geek named Napoleon Dynamite has a brother named Kip who chats online to find his soul-mate. His Uncle Rico arrives to take care of them. Pedro SÃ¡nchez is befriended by Napoleon and have plans of running for class President. This would have not been entertaining if it weren't for the sensational geeky performance of Jon Heder. It's humor though at times a bit juvenile, were effective in most scenes. Screenplay was a bit sketchy and amateurish but still conveys the messages of friendship, school adversities and dreams. The feel of Napoleon Dynamite was much like Scott Pilgrim vs. the World, but with less action of course and fantasy aspects. Th camera direction relies on the …

Teenagers Will Love It, Everyone Else Should Run

Usually, after seeing a film for the first time, I have a 1-10 score in my mind that I plan to assign the film when I later write my review. If not, I'm usually fighting between two numbers. But Napoleon Dynamite has simply confounded me. It has taken me some time to decide whether I absolutely adore this film, or absolutely despise it.

Napoleon Dynamite doesn't have a true plot (the only suggestion of a plot doesn't even occur until halfway into the film), but it does have a sort of premise. We follow the adventures of Napoleon Dynamite, a junior in Highschool, whom is nerdy, not particularly bright, and completely unpopular (he has but one friend; Pedro). Napoleon also has a brother named Kip, who's a nerd like him, who spends most of his time hanging out in "chatrooms" online. …

Napoleon Dynamite is based on a series of skits that were showcased on MTV and feature a buck-toothed, slack-jawed high school nerd who lives in a fantasy world of his own construction. It's an affectionate parody of small town America in the "triumph of the geek" tradition in which the social outcasts find happiness and acceptance in the face of abuse and derision by their more popular peers. It's more gently amusing than laugh out loud funny as it's just a series of surreal skits revolving around Napoleon and his family's social awkwardness but it's a lot more likeable than most American comedies of this type because it avoids the usual formula of hateful middle class yobs and their bodily secretions amidst vile misogyny that has become the staple of the genre since American Pie …

No posts have been made on this movie yet. Be the first to start talking about Napoleon Dynamite!