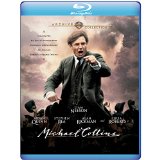 Plot: An Irish Patriot in the first quarter of the 20th Century fights for his nation's independence and signs his own death warrant in the process.

Michael Collins was a pivotal figure in Irish history, and this is a brave attempt to represent a story rarely attempted in mass media by Neil Jordan. Collins was the original "terrorist", and practically invented modern warfare employing guerilla tactics and counter intelligence to fight the British Empire to a standstill, a force he had no chance against using conventional means. This resulted in the treaty of 1922 which saw the country divided for the next 80 years. Liam Neeson is excellent as the pragmatic and larger than life man of the people, and although the film inevitably is rather rose tinted in it's representation of the man (as all of these kinds of biopics are) Jordan's brisk no-nonsense style is never pompous or preachy. The subject matter means that there is a lot more …

No posts have been made on this movie yet. Be the first to start talking about Michael Collins!