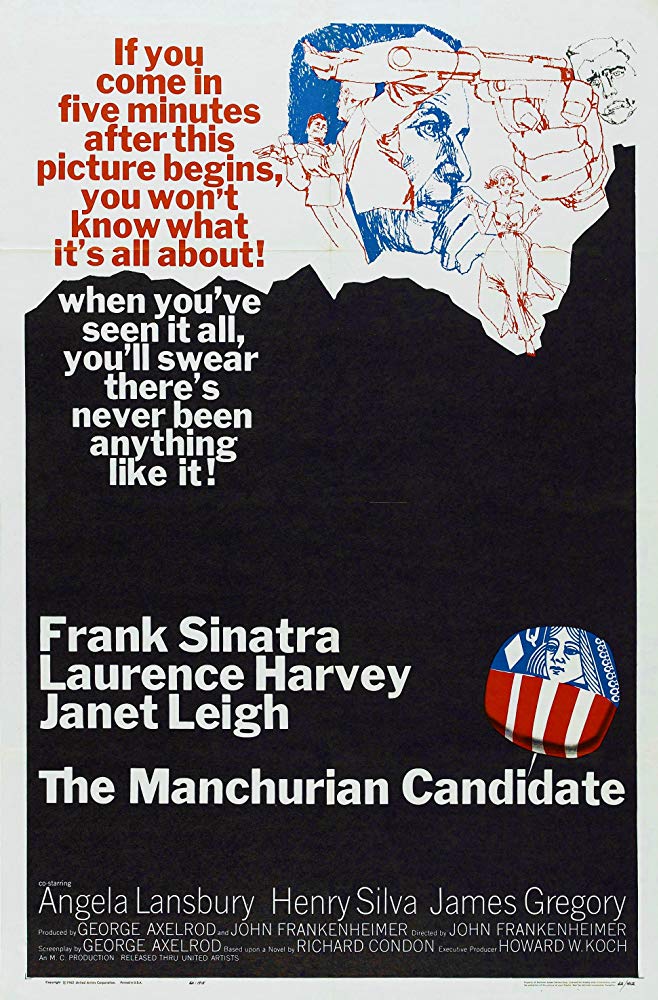 Plot: Former POW's recall the same events of a heroic moment, but have nightmares that the event occurred different than remembered.

While the thrills sometimes feel underwhelming, its message is not remotely subtle.

One of the greatest political thriller movies ever made!

I'll admit, I watched the remake first. Both versions are vastly different. I'm not going to compare them. However, I will say that I felt the remake was much more 'thrilling' in a typical sense. It had me on edge for the whole runtime, whereas this 1962 version took a long while to get tense. There's an awesome brainwashing scene in the start (the shared dream) that's cold and unsettling. Then things get convoluted, story wise, for a big portion. It doesn't retain the vibe of the brainwashing scene until the last half hour, but by then I had already lost some interest. I can't really explain my non-enthusiatic nature towards this film. It's good in all aspects, from a filmmaking standpoint, I just didn't care much for it.

I just absolutely love Frank Sinatra and Lawrence Harvey in their respective roles. Especially Lawrence Harvey who at first comes off as a huge twerp with mommy issues, but by the end of the film he has become incredibly sympathetic and complex.

It really is Harveyâs character who makes this one fore me. He playâs both an uptight jerk and a melancholy child so well, and so seamlessly that his switching back and forth between both sides of himself isnât even noticed by the audience. His âloveableâ monologue is one of my favorite movie monologues of all time, and also marks one of the first times I cried during a movie.

I also absolutely love the whole mind control plot, I always thought that the Idea of mind control was fascinating, and wondered why I hadnât seen …

Staff Sergeant Raymond Shaw (Laurence Harvey) and Captain Bennett Marco (Frank Sinatra) are friends. Ben suddenly have violent dreams in which he is being experimented on to kill his comrades. Mrs. Eleanor Iselin (Angela Lansbury) instructs her son in what to do. Senator John Yerkes Iselin (James Gregory) is part of a massive plan. Jocelyn Jordan (Leslie Parrish), the daughter of Senator Thomas Jordan (John McGiver), is married to Shaw.

The pace was somewhat sluggish to bring out the details of the inventive political plot. Laurence Harvey played his part well while Sinatra a successful support. Kudos though to the antagonist, Angela Lansbury was wicked. Score was effective and the one of the pioneering hand to hand combat was realistic. Aside from the length, dated action and …

"But now, we have come almost to the end."

Thank God this film was resurrected after its long disappearance following the Kennedy assassination and the ensuing legal battle over rights to profits. Frank Sinatra gives his finest performance as the brainwashed POW who begins, in nightmares, to recall the mental torture he and his fellow officers underwent. A nice twist is put on the character of Laurence Harvey's assassin--rather than conscripting an affable fellow for the part, the enemy has engaged the son of its traitorous stateside comrade, who just happens to be cold and intensely unlikable. Harvey's work is more than adequate in what is largely a thankless role. Janet Leigh's enigmatic girlfriend provides one of the film's more intriguing plotlines. Who is she? From where did she come? Is she just an offbeat character …

No posts have been made on this movie yet. Be the first to start talking about The Manchurian Candidate!