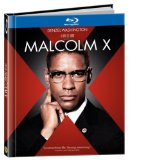 Plot: The life and times of Malcolm X: describes how he was raised, and became a common criminal. Then, reformed himself into what we now know him to be. -- sapien

Directed with levels of assurance and evocation only Spike Lee could provide, "Malcolm X" is worth every minute of its lengthy runtime.

Spike Lee's best movie. Denzel Washington is pitch perfect as Malcolm X, the charismatic and controversial civil rights leader. Spike Lee doesn't shy away from showing his early life as a criminal or his polarizing work with black nationalists and celebrates his repeated affirmation of black pride in Afro-American cultural heritage. He is shown as a fully fleshed out human being over the course of nearly three and a half hours. But the pacing and editing is excellently done. It's the rare biographical epic that feels timeless and as relevant today as it was over twenty years ago or even during the Civil Rights era.

Spike Lee's sprawling biopic, while not at all avoid racial tension, manages to be pretty historically accurate and straight-forward, when it comes to depicting the life of the civil rights and religious leader. Denzel Washington gives an enveloping and consistent performance that is among his best.

I'm not the biggest fan of Denzel, but he is extremely convincing in this sweeping biopic of the black activist and political icon Malcolm X by Spike Lee. The man had a remarkable and fascinating life, born into a world of prejudice and violence and later seduced by a life of crime when he goes to the big city and encounters Delroy Lindo, a black man who commands power, and more importantly, respect. This heralds the most interesting part of the film when Malcolm is imprisoned for 10 years for burglary and encounters his mentor who teaches him his salvation in the form of Islam. This leads to his rebirth as civil rights activist, only to find disenchantment and then betrayal at the hands of those he trusted most. This biopic has everything; crime, gangsters, prison drama, politics (both …

The history of Malcolm X was stunningly portrayed effectively by Denzel Washington. Playing a part in one of the most influential African American leaders is such a challenging task. Angela Bassett as Betty Shabazz was good in being a wife to Malcolm. A few memorable quotes: Baines â âA man curses because he doesn't have the words to say what's on his mind.â Malcolm X â âCats that hung out together trying to find a solution found nothing. Cats that might have proved space or cured cancer, West Indian Archie might have been a mathematical genius... but we were all victims of the American social order.â âAll we've seen is hypocrisy! We don't see any American Dream. We've experienced only the American Nightmare!â The filmâs intent was good; unfortunately there were …

No posts have been made on this movie yet. Be the first to start talking about Malcolm X!