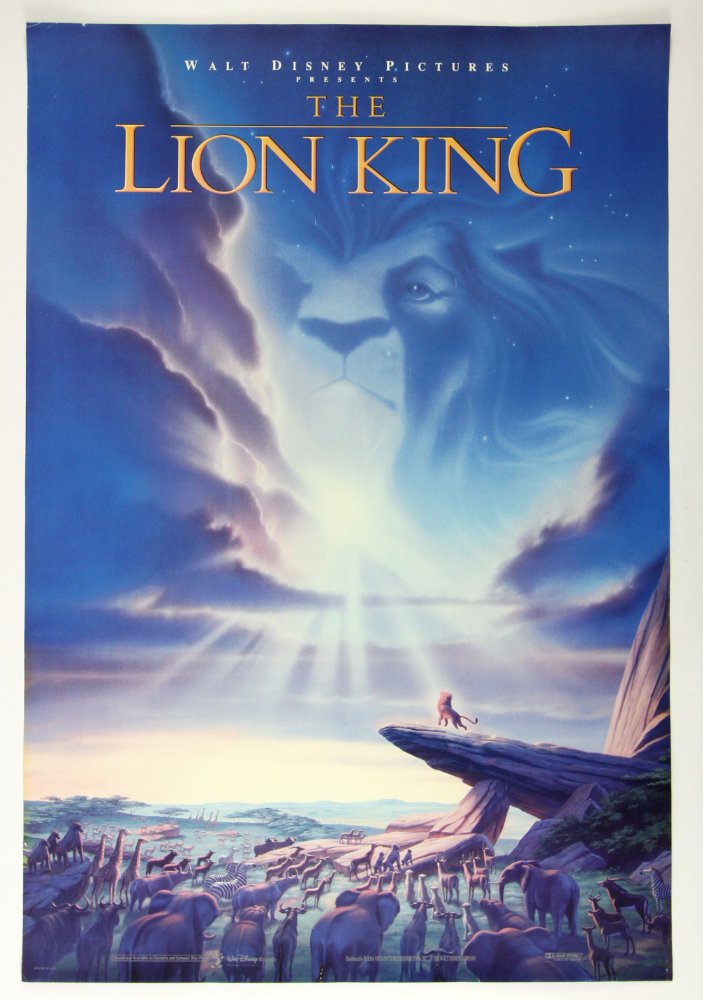 Plot: The son of the King of the Jungle believes he killed his father where he goes into exile. The rest of the pack believes he's dead when he decides to come back to regain control several years later when he questions his confidence.

My favorite animated movie, it's one of Disney's best for its epic sense of what animation can achieve.

The Lion King tells the story of a young lion cub named Simba who is destined to be King of his animal kingdom. Consumed by jealousy, Simba's sinister Uncle Scar murders the current king and his brother Mufasa, cleverly making the death look accidental, and encourages Simba to run away which he does and is later believed to have been killed by the hyenas that Scar sent after him.

Years go by during which Simba meets two hilarious characters a zany meerkat named Timon (voiced by Nathan Lane) and his kind warthog companion named Pumbaa (voiced by Ernie Sabella) who teach him some important lessons: Life is worth living. And Hakuna Matata - no worries

But when Simba's old friend, Nala, comes to see him as an adult and tells him that Scar has destroyed the kingdom, Simba must confront …

Not Disney's Best, But Delightful All The Same

If one were to name Disney's best known films, The Lion King would certainly be mentioned. Often considered Disney's best film, The Lion King is one of Disney's biggest successes. Personally, I would find Beauty and the Beast or The Princess and the Frog to be more suited towards the coveted title, but that doesn't change the fact that The Lion King is still an entertaining and well made production worthy of the Disney label.

The Lion King is about a young lion named Simba whose the rightful heir to the throne. In a tragic turn of events, Simba's father, Mufasa, is murdered by Simba's treacherous uncle, Scar. Scar tricks Simba into thinking that himself is to blame, so Simba runs away, leaving the throne to Scar. Simba finds new friends in the form of a warthog named Pumba, and a …

One of the best Disney films produced in terms of emotion, pace of the story, soundtrack and animation in my opinion. One of the few wonderful lines: Simba - "I walk on the wild side. I laugh in the face of danger." Scar - "Life's not fair, is it?" Mufasa - "When we die, our bodies become the grass and the antelope eat the grass. And so we are all connected in the great circle of life." "Simba, being brave doesn't mean you go looking for trouble." Wonderfully voiced characters by Matthew Broderick as Simba (mature), James Earl Jones as Mufasa, Whoopi Goldberg as Shenzi and Rowan Atkinson as Zazu just to name a few. Loaded with so many accolades from Academy Awards, Golden Globes, British Academy, MTV, AFI, and more which speaks of its technical brilliance and heart from the story. …

No posts have been made on this movie yet. Be the first to start talking about The Lion King!