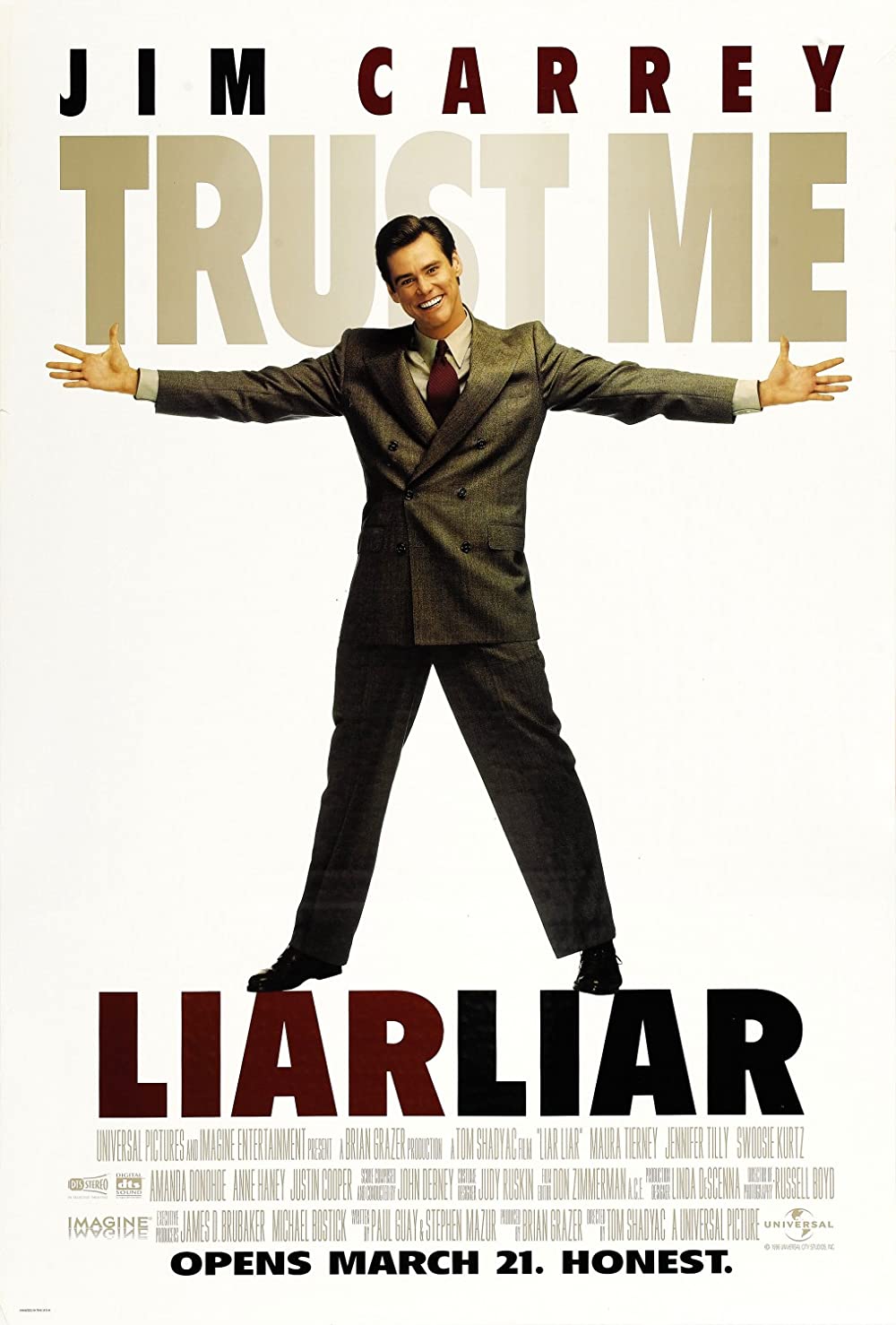 Plot: Slick, successful lawyer Fletcher Reed has built his practice by being adept at lying. Success at work comes at the expense of his family. His son Max only wants one thing for his fifth birthday: for his father not to lie for one day. -- Chris Kavan

Jim Carrey carries "Liar Liar" the same way he carries all of his weaker comedies.

One of Carrey's better performances and a good premise. Worth the watch for Carrey and comedy fans.

One of Jim Carrey's best movies.

Liar Liar is a funny film. The movie is about a lawyer who never tells the truth. On his son's 5th birthday, Max makes a wish that his dad will not lie for one day.

Guess what it comes true. Some of Jim's scenes are hilarious especially when he his beating himself up. The other actors such as Maura Tierney and Jennifer Tilly do a good job. Though i've seen many Jim Carrey movies before , Liar Liar turned me into a mad fan of his. Liar Liar is the perfect comedy that can be also considered a drama because of the plot. Only Jim Carrey can act the way he acted in Liar Liar. He is definitely the king of comedy. This was my favorite Jim Carrey movie and I recommend this movie to all viewers who like Jim Carrey and like to laugh a whole lot.

Jim Carrey proved yet again with Liar Liar that his comedy and acting abilities are outstanding. Carrey plays the witty Fletcher, a divorced lawyer who is in the middle of the biggest case of his life. Along with trying to prepare for the court hearings, he has to find time to spend with his cute and loving son Max who he constantly is breaking promises too, never intentionally. On the night of Max's birthday, in which Fletcher promises to attend but gets 'caught up' at work, max wishes that his dad could for one day, not tell a lie.
What follows is the funniest day of his life. Being unable to tell a lie, Fletcher now must find a way to win the case and his son and ex-wife to his side. The court hearings are pure genius with Carrey as the lawyer acting opposite Jason Brenard as the …

No posts have been made on this movie yet. Be the first to start talking about Liar Liar!