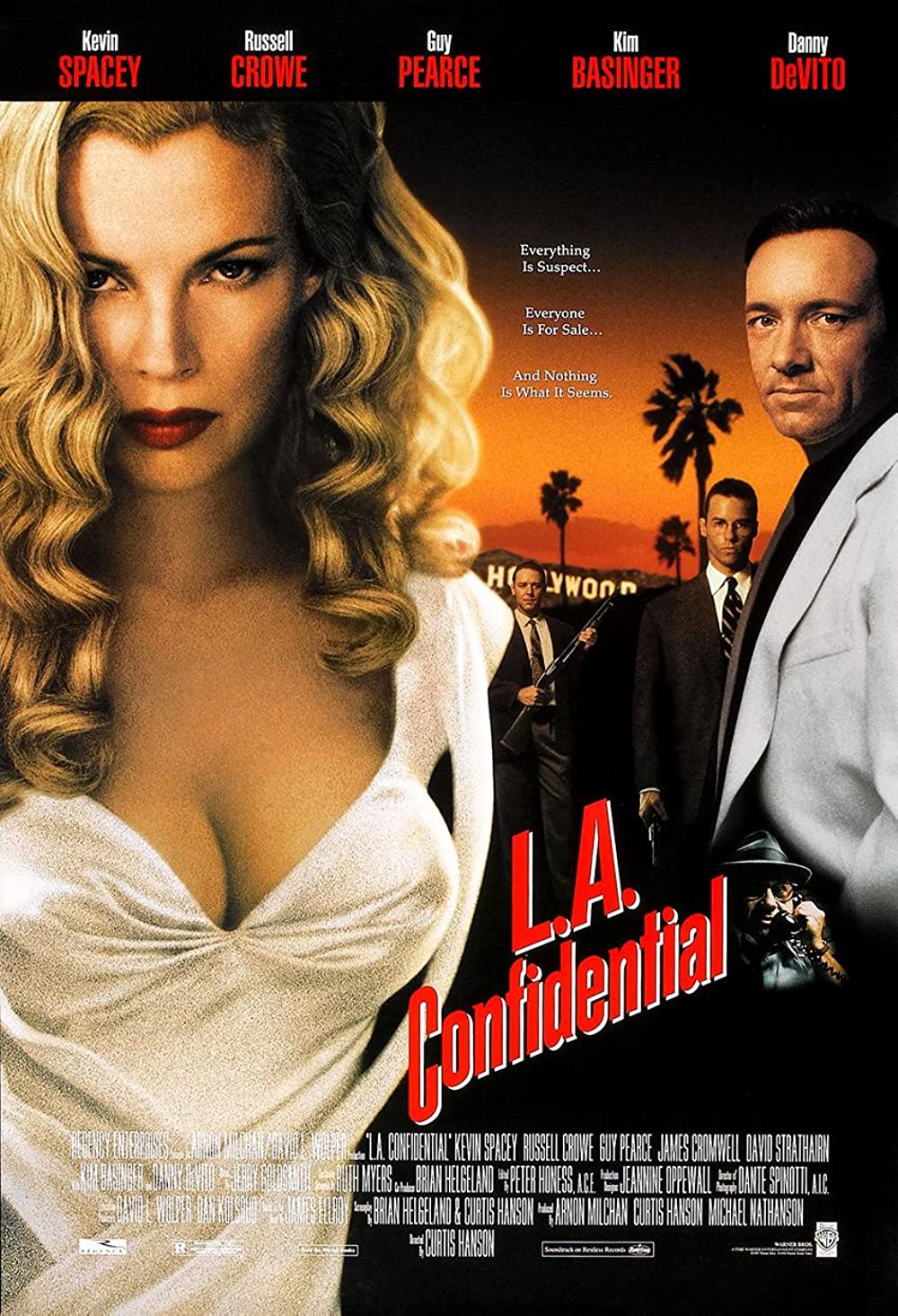 Plot: A rookie "do good" cop investigates murders and corruption in LA, while other cops do the same, trying to figure out the shooter and the corruption.

Benefiting from strong writing and effortless performances, this brilliant neo-noir follows not one, not two, but three 1950s L.A. detectives.

A wonderful film with a great cast. Everybody involved was at their best in this engrossing film. Even after seeing this film multiple times it never gets old. The cinematography is breathtaking and the screenplay deservedly won the Academy Award. This tale of corruption in the Los Angeles police department in 1950 will grab hold of you and it won't let go until the credits roll. Russell Crowe has never been better, and yes I'm including the overrated Gladiator in that statement. This is a must see that ran into the juggernaut that was Titanic that year at the Academy Awards, although I prefer Boogie Nights out of all movies released in 1997.

A rookie "do good" cop investigates murders and corruption in LA, while other cops do the same, trying to figure out the shooter and the corruption. This movie has a excellent cast and characters and acting.

'I wouldn't trade places with Edmund Exley right now for all the whiskey in Ireland.'

I'll say it: The movie is fantastic. It does everything correctly.
The story is about police corruption and investigation in the fifties, centering around three characters played by Russell Crowe, Kevin Spacey and Guy Pearce respectively.
It's a very delicate topic, and can be done wrong easily, but here it succeeds with a passion.
I don't know where to begin. The acting of the trio is Oscar-worthy, and some of the dialogue they jump back and forth with is incredible. At times I believed that everything was natural and unscripted. This brilliant collection of actors just really knows how to read lines and make them seem authentic.
To me, the most important trait of this film is the group of …

A Masterfully Spun Web of Corruption....

It is the early 1950s, and the L.A. police department, rampant with corruption, tackles the sleazy underbelly of the city. The film focuses on three different types of cops, the brutal Officer Russell Crowe (as aggressive hothead Wendell "Bud" White who lives to beat confessions out of suspects and to punish woman beaters), aspiring Lieutenant Guy Pearce (as Edmund "Ed" Exley) who operates "by the book" and Sergeant Kevin Spacey (as Jack Vincennes) who derives great satisfaction from being the technical adviser on a popular TV cop show called "Badge of Honor".

All three actors turn in fine performances, along with Kim Basinger, (who won an Oscar for playing a prostitute who's a Veronica Lake look-alike), veteran Captain James Cromwell (as Dudley Smith), "Hush-Hush" tabloid reporter …

The plot was brilliant and pace of the story was right. Its score, costumes and screenplay were endearing and fitting. Each character had its own personality and is likable to a fault. Definitely one of the best 90's multi-nominated film. Theme's of police corruption, loyalty and persistence were presented. L.A. Confidential is a wonderful crime …

No posts have been made on this movie yet. Be the first to start talking about L.A. Confidential!