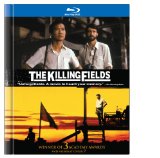 Plot: Based on the true story of a photographer in Cambodia during Pol Pot's atrocious killings. -- sapien

Destruction and violence shown from the point of view of a journalist covering the state of the war-torn country in which it's set.

This is an often brutal and emotionally captivating portrait of wartorn Cambodia. It approaches war from an interesting perspective and features an astonishing supporting performance by non-actor Haing S. Ngor. It's often tough to watch, but ends on a very moving note.

This movie is extremely hard to follow. But, I got the gist of it. And, since it's an anti-war movie, I can dig it.

One of the very best true to life stories about an accidental bombing in Cambodia in the early 1970's where numerous lives were grievously affected. Reporter Sydney Schanberg (Sam Waterston) and Al Rockoff (John Malkovich) together with Dith Pran, a Cambodian journalist, cover the story. Haing S. Ngor keeps this film interesting from start to finish. Great screenplay with quotes from the journals of Pran - "The wind whispers of fear and hate. The war has killed love." "Nothing to forgive Sydney. Nothing." Sydney - "Because if anybody ever gets to read about this you won't be able to look 'em in the face." Fast paced for a drama, performances authentic while the settings were lifelike and harrowing. Score was haunting as the scenes. The Killing Fields is about the horrors of …

"The Killing Fields" by Yojimbo

The Killing Fields is based on the true story of Dith Pran, a Cambodian journalist caught up in the atrocities of the Khmer Rouge who seized power in the mid seventies. I saw this film many years ago and it had a profound effect on me at the time, not having previously known of the events it documents. To be honest, it is not quite the masterpiece I remembered it to be; the first hour is a pretty generic, if decent foreign-journalists-caught-up-in-civil-conflict story and it is showing its age a little. The soundtrack in particular at times sounded like it'd be more at home in a John Carpenter film than an epic human tragedy. Also the scale of what happened is almost impossible to get your head around and the rather dry, factual way it is presented means that the emotional connection of …

Top Ten Films of 1984 by KingoftheCorn

No posts have been made on this movie yet. Be the first to start talking about The Killing Fields!