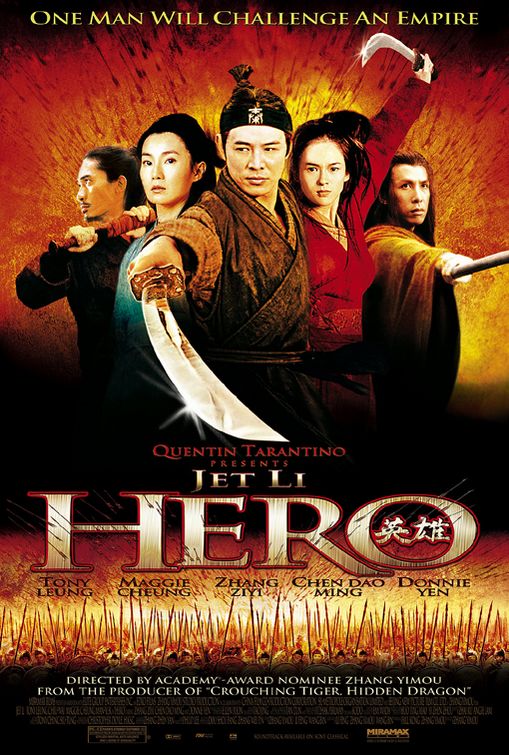 Plot: The story told through flashbacks of a Samurai type man shows how he kills three assassins who tried to murder the lord of china - before it was china.

One of the best of its kind, "Hero" is a martial arts pic with bright colors, terrific fight scenes, and a complex narrative that relies on dishonesty and flashbacks inside of flashbacks.

Hero is a unique martial arts film - one which balances ferocious action with beautiful and poetic visual sequences. The color palette is unbelievable and every frame of the film could be framed and hung as a still image. The film also supports its visual beauty with some powerful acting and thematic importance.

A lone warrior enters the palace of his emperor and tells the tale of how he defeated the three most feared assassins in the land. The most obviously striking element of Hero is its sheer visual beauty as it is packed to brimming with stunning costumes, colours and sets and uses the same kind of graceful wire work that we encountered in Crouching Tiger, Hidden Dragon. The fight choreography is also beautifully executed making for a very poetic martial arts film. The plot is a reasonably interesting hybrid of Rashomon and The Usual Suspects which adds a different twist to the usual "heroic warriors making noble sacrifices" formula of this type of thing but it is clearly languishing in the back seat to Yimou's primary concern, the visuals; in fact a few of the scenes seem completely …

Jet Li (Nameless), Tony Leung (Broken Sword), Maggie Cheung (Flying Snow), Zhang Ziyi (Moon) and Donnie Yen (Long Sky) all have endearing performances. The script was effective in relaying the themes of peace, love, character and unity. Has one of the best action sequences, stunning cinematography and locations on film. The exquisite colors used on the flick were really impressive and lush costumes were utilized well to depict the era. Good character development and score were well matched. Plot was brilliant and the tragic ending which resulted in the unification of China is unforgettable. Chen Daoming (King of Qin) did a splendid job with the dialogue as well. Overall, a visual masterpiece filled with impressive battles and drama that crafts a real âHero.â

No posts have been made on this movie yet. Be the first to start talking about Hero ( Ying xiong )!