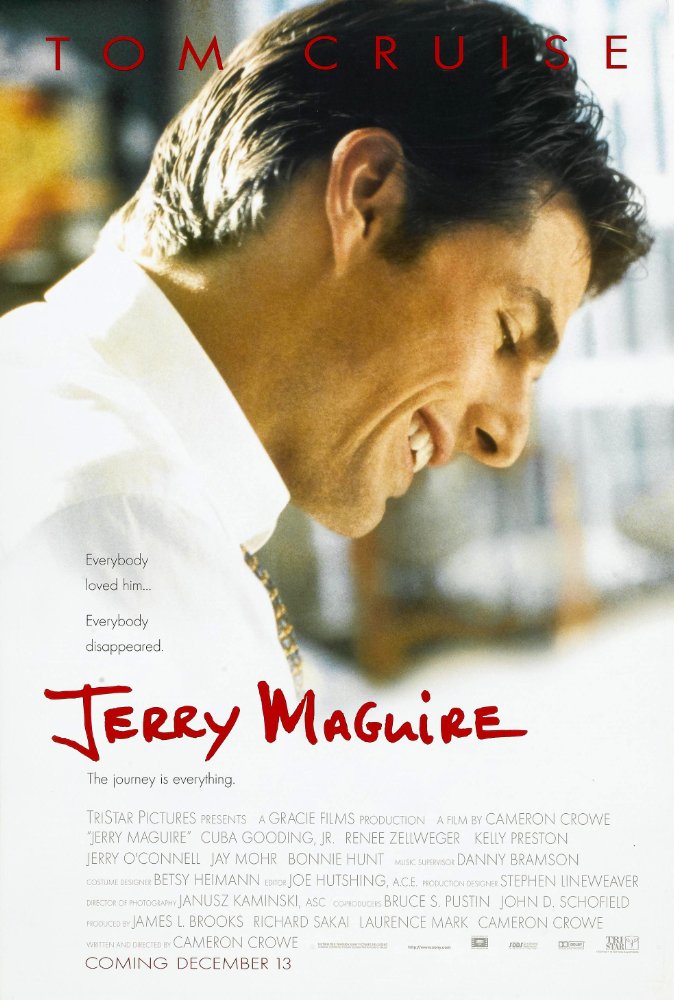 Plot: A sports agent goes through a hard time and discovers there is more to life than money.

Lengthy but charming comedy-drama about a sports agent (Cruise) who has an epiphany about his career and falls in love with a single mother (Zellweger). Cuba Gooding, Jr. is pretty good as his loyal if high maintenance client.

Cameron Crowe's script and actors' performance compliment each other in this heartfelt comedy-drama.

A very fun film to watch as you go through the highs and lows. A must watch just for the memorable quotes of the movie.

Jerry Maguire (Tom Cruise) is a sports agent, is let go because of distributing a mission statement about a mission statement about dishonesty in the sports management business. Bob Sugar (Jay Mohr) does the firing. Jerry discusses a contract with wide receiver Rod Tidwell (Cuba Gooding, Jr.). Single mother Dorothy Boyd (RenÃ©e Zellweger) joins Jerry to put up their own agency.

The screenplay astoundingly well written with quotes from the film: Jerry - "Help me... help you. Help me, help you." "We live in a cynical world, and we work in a business of tough competitors, I love you. You complete me." Dorothy - "You had me at hello." Dicky Fox - "Look I don't have all the answers. To be honest,in Life, I failed as often as I succeeded. But I love My wife. I love My life. And I wish …

In 1996, "Jerry McGuire" proved itself as a breakthrough film for many of its cast and crew. It earned many awards, including five Oscar nominations (Best Picture, Best Director, Best Actor (Tom Cruise),...), winning two (Best Original Screenplay and Best Supporting Actor (Cuba Gooding Jr.)). Therefore, this film proved the true potential in several of its cast members, namely Tom Cruise, Renee Zellweger, Cuba Gooding Jr., and producer, director, and writer Cameron Crowe (2000's "Almost Famous", 2005's "Elizabethtown"). Though some had previously stretched themselves as artists occasionally, this film earned them newfound respect like never before. "Jerry McGuire" follows a greedy workaholic sports agent who suddenly loses his job. This begins his path of soul searching, which teaches …

Jerry Maguire Review
By Benjamin Hampton
The movie Jerry Maguire reaches out to many audiences since it incorporates comedy and sports into a romantic drama filled with life lessons. Personally, I have two different views of the movie. When I was younger, I enjoyed the many comical interactions between some of the actors and especially the funny mannerisms of Ray, a young boy. Now, as I have matured, I understand the movie has a deeper meaning, which relates to issues that people face in everyday life. Jerry Maguire is an entertaining movie because it contains relevant lessons about life, evokes feelings, and the characters evolve for the better as the plot unfolds.
Many of the characters in Jerry Maguire change for the better, which makes this movie heartwarming. Director …

No posts have been made on this movie yet. Be the first to start talking about Jerry Maguire!