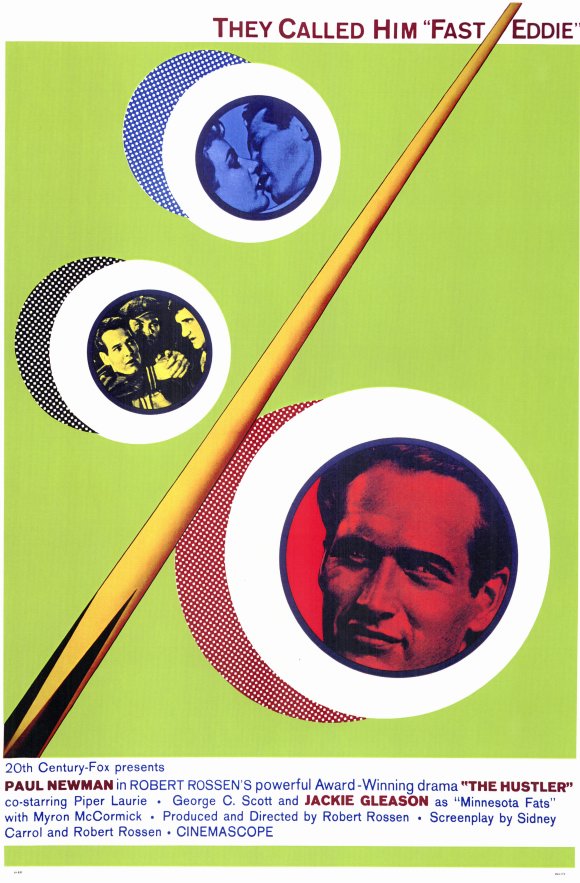 Plot: A young pool player challenges a long-time champion in a high stakes game of pool.

An engaging sports movie with great drama and a slick, hot-shot performance from Paul Newman.

"Fast Eddie" Felson is a pool hustler who plays with Minnesota Fats. He looses because of being drunk and arrogant. Eddie meets Sarah Packard at a bus terminal. Aside from the solid drama and spectacular plays on the table, I admired its premise of transformation. It showed how one can mature and change character after encountering a loss. Newman was definitely engrossed in his role while the screenplay fantastic with depiction of the world being "perverted, twisted and cripple," which in reality at times it is. It even cameos Jake LaMotta and pool champ Willie Mosconi. The Hustler is a fun flick to watch especially for pool fanatics.

This is one of a handful of films that exhibit a pure performance. In every frame, Paul Newman is Fast Eddie Felson, living and breathing nuances into a tortured character. Pool is only the backdrop for what becomes an explosive character drama of romance and betrayal. That sounds like the plot of a soap opera, but Newman makes it so much more.

Let me make this nice and clear for you...if you like playing billiards you will definatly enjoy this film. After watching 1986's The Color Of Money which also stars Paul Newman once again replaying his role as Fast Eddie Fulson i was shocked to learn that it had a predecessor in the form of 1961's The Hustler. Enjoying the 86 version as much as i did i jumped to watch this now not being a fan of classic black and white film i was a little leary but was very surprised how quickly i came wrapped up in this. Fast Eddie Fulson (Newman) comes across Minnesota Fats (Jackie Gleason) he immediatly challenges him to a vicious 24 hr marathon of pool only to have his own game of hustling backfire on him as he leaves penniless. He bumps into a new gal at the busstop, Sarah Packard (Piper Laurie) …

"The Hustler" by Yojimbo

When a brash young pool shark is handed a lesson in humility by the accepted best in the business, he teams up with an amoral gambler to challenge for a rematch. The Hustler is to pool what Raging Bull was to boxing and it is clear that Scorsese was influenced by this film when he made it (Jake LaMotta, the subject of Raging Bull, even appears in a small role). It's a story of emptiness in victory, as Fast Eddie learns that pride and self respect are not the same thing. His clashes with his financial backer, brilliantly played by George C. Scott, are by far the best parts of the film as he realises that a relentless pursuit of the win removes all the joy from and appreciation for the game he loves. It's beautifully shot, perfectly played and intelligently written but I'd have to say the …

This made Pool a sport!!

This is a masterpiece plain and simple, with wonderful storytelling, a brilliant ending and an Oscar worthy performance from Paul Newman!. All the characters are wonderful!, and i for one found the middle to be extremely interesting, plus Paul Newman is simply incredible in this!.I'm not really into Pool, but i have heard critics constantly praise this film, so i wanted to check it out, and i was quite surprised by how incredibly good it was!, plus i found the middle part of the film to be quite engaging, as i said, earlier in my review. The opening is really cool, and the 1st match between Fast Eddie and "Minisota "Fatts" is exciting and heartbreaking at the same time, plus Paul Newman should have won an Oscar for this!.The film is very depressing, but it was very entertaining all the …

Movies of 1961 by Stoney McStonerson

No posts have been made on this movie yet. Be the first to start talking about The Hustler!