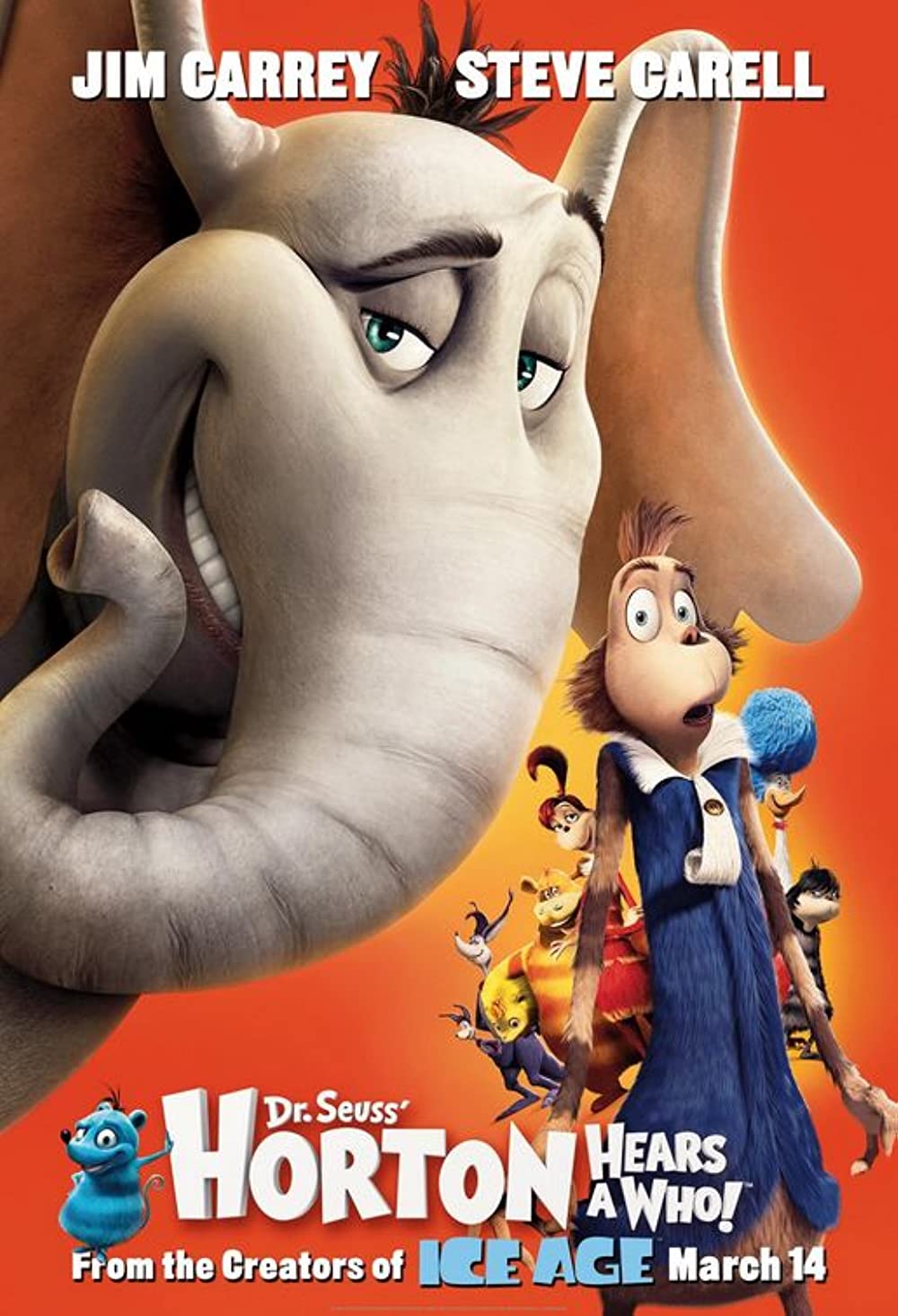 Plot: Horton Hears a Who is based on the 1954 book by Ted Geisel, who wrote under the pen name Dr. Seuss. It is about an elephant who hears voices on a tiny spec of dust. Thinking that their is life in the spec he tries to help, but all of those around him think he has lost his mind. -- Josh C

This was a very bland and unimaginative film. It seems as though it is very hard to get Dr. Seuss on the big screen with much success. Have your kids watch it if it is on. I really wouldn't even run to the video store to rent this one for the family.

Surprisingly more magical and charming than I expected. This does justice visually to the Dr. Seuss style more than any other Seuss-based film I have seen.

While it didn't blow me away, this is much better than the horrid live-action Suess movies that have come out. The voices are well-cast, the animation is smooth (including a great faux-anime insert) and it was enjoyable.

Horton Hears a Who!

This film shows the strengths and weaknesses of most current animated films. The use of computers to animate films leads to stunning sets and characters. The images jump off the screen with incredible depth. The problem is that such beauty masks the underlying storytelling.

In this case, a simple short story is stretched into an 85 minute movie. Don't get me wrong. It was cute, funny, and true to the plot of the book. But, it wasn't true to the character of the book. Horton was a sad character, an outsider who took a big chance by defending the Whos. In the book, no one seemed to like Horton at the outset, making his sacrifice... and his ultimate victory... more impressive. In the film, Horton is a goofy, likable character, which makes the Kangaroo's vendetta seem out of …

In 1954, Theodor Geisel, better known as Dr. Seuss, published a short book about an elephant who could hear voices from a speck of dust, but nobody else would believe him. The elephant stood firm and stated that âan elephant's faithful, one hundred percent.â He stood by what he thought was right and triumphed over impossible odds. Luckily, Jim Carrey did the same with the movie adaptation of said book.

âHorton Hears a Who!â was not expected to be as good as it turned out to be. Jim Carrey was back after having played The Grinch eight years earlier, and neither that movie nor âThe Cat in the Hatâ are exactly masterpieces. So another adaptation was bound to fail with critics. Of course, this didn't happen, and it won't happen here either.

I will admit that I was skeptical …

I'm light as a feather

A little cheesy but holds up its own with a slight touch of modesty and fun. Dr. Seuss is a true genius when it comes to creating something that allows a person to become what he or she once was. All of us are taken back to that time and place where fairy tales and magic come true. That once in our lives we were young and innocent. This is what Horton Hears a Who's about, to help us remember how to be a child again. And bring back that long lost smile in our faces and laugh in our hearts content. It has a good story to tell and have massive pool of talented actors to create a world that only in our imagination can exist. The tandem of Carey and Carell is almost like a perfect combination. Both of them just brought their magic and everything just blossomed on screen. Although this movie …

No posts have been made on this movie yet. Be the first to start talking about Dr. Seuss' Horton Hears a Who!!