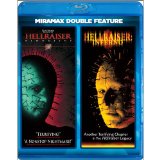 Plot: In the 22nd century Dr. Paul Merchant seeks to right the wrongs of his ancestor Phillip L'Merchant who created the original box, which opened the gates of hell. In his space station he has built a reverse box to close the gates of hell forever, but Pinhead and the other cenobites are not about to go without a fight. -- Chris Kavan

I couldn't make sense of anything and there was nothing good that happened. I stopped with the series after this entry.

I totally LOVE the Hellraiser movies! They're one of the best movie franchises ever made.

The last in the Hellraiser series that I watched and it went downhill fast. The first two are excellent. The third is passable but his fourth in the series throws everything out the door. The story and acting are just poor - leave it alone.

This line sums up the franchise at this point and my attention towards these movies.

I went into this not knowing too much about the plot, but as soon as I saw a spaceship gliding through space and realized this takes place in the future, I said to myself, âoh no.â Every time a horror killer goes to outer space, itâs destined to fail. The Leprechaun, Jason Voorhees, and Pinhead. But on the bright side, the movie doesnât only take place in the future, but through different periods, a bloodline dating to 1796, 1996, and 2127.

I was detached by this one, as watching this one felt like work. Even trying to write this feels like a chore. The characters suck, the acting is terrible, and the script is convoluted.

One of the Top Horror Sequels

This movie redeems the Hellraiser franchise after the disappointing 2nd and 3rd entries. Almost immediately there is profound gore and grotesque demonic imagery assaulting the viewer. People are dismembered, skinned, and tortured, even purposely melded into demons, as the Hellraiser series loves to do. A sick noble from the 1700's thinks he can manipulate a demon from Hell to do his every whim, but it ends badly for him. The demons continue to wreak mayhem throughout our timeline and into the future, where someone finally devises a secret plan to defeat them. This movie is drenched in blood and plays out much like an excellent episode of Tales from the Crypt. This is actually almost better than the first Hellraiser. Ignore the negative reviews here, if you go to see a movie called …

my VHS tape collection by sc83x

Movies I Own by ghouls

No posts have been made on this movie yet. Be the first to start talking about Hellraiser: Bloodline!