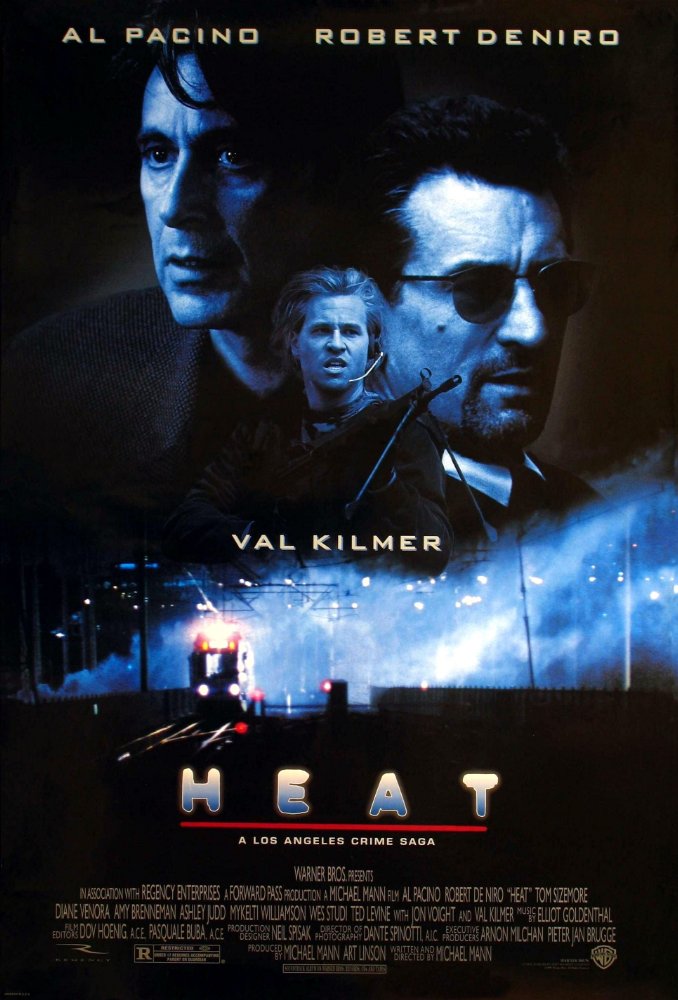 Plot: As two men face each other on opposite sides (one a thief, one an officer) they battle for ground as they explore the streets of L.A.

You really can feel the heat coming off this polished, Michael Mann directed thriller.

The story is about two men face each other on opposite sides (one a thief, one an officer) they battle for ground as they explore the streets of L.A. This movie has Al Pacino a legend actor and we got Robert DE Niro who is a legend as well, all two of those actors having a shoot down with either is just pure epic and this movie didn't let me down.

Al Pacino + Robert De Niro + Michael Mann = one of the best heist movies of all time!

This movie was absolutely amazing. I cannot believe it took me this long to watch it. I really like who they chose to play which roles. I think Pacino was great as the detective and De Niro was great as the criminal. A perfect cat and mouse movie, where both cat and mouse are equally smart and equally devoted to their chosen livelihood. The scene at the coffee table was a brilliant dialogue that I will now think of for all movies with the same background. One chose to dedicate themselves to the right side of the law and the other chose to dedicate himself to breaking the laws. Everything about them is the same except the biggest part of them. The final scene was also extremely breathtaking and exciting. Everyone should watch this movie, if not only for this scene; …

An obsessive robbery homicide detective is locked in a battle of wits with an ingenious crew of professional criminals looking to score a multi-million dollar bank heist under his very nose. When you see a cast list like this one you know you're in for something special, but Heat is not just special; it's an absolute masterclass. It's a fairly common formula in this day and age, showing cop and criminal as two sides of the same coin, but the way Mann effortlessly flits between both sets of superbly realised characters has never been bettered and paved the way for the modern cop drama including everything from Infernal Affairs to The Dark Knight. The performances are all, of course, top notch and every aspect of the film that surrounds them is faultlessly engineered to create a near …

Movies I Want To See by Omoney76

No posts have been made on this movie yet. Be the first to start talking about Heat!