Harry Potter and the Prisoner of Azkaban Movie Information 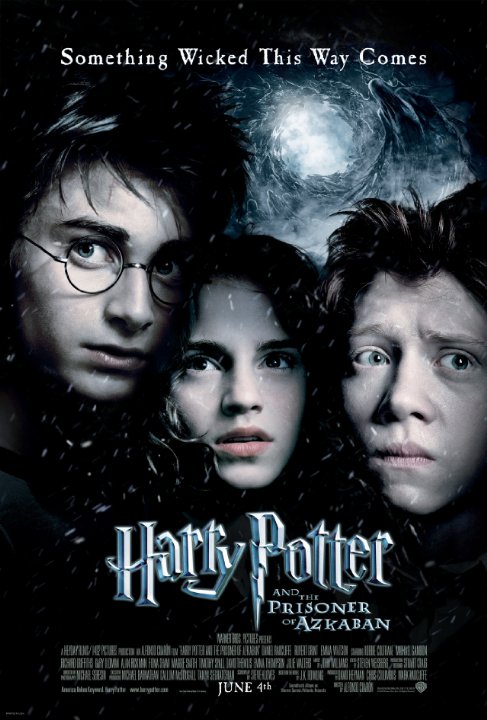 Plot: In his third year at Hogwarts, Harry has to deal with the escape of Sirius Black from the wizard prison of Azkaban, the man said to have betrayed his parents to Voldemort.

The sudden shifts in style and tone from the first two is jarring at first, but they help to move this franchise into a more adult direction that still manages to be whimsical while adding a sense of maturity to its original formula.

In his third year at Hogwarts, Harry has to deal with the escape of Sirius Black from the wizard prison of Azkaban, the man said to have betrayed his parents to Voldemort. best harry potter yet just a well shot movie with a fantastic director like "Alfonso Cuaron".

I don't think this is my favorite HP film, but it certainly is one of the best. Alfonso Cuaron's direction is what holds The Prisoner of Azkaban together There are many brilliant sequences throughout the film, but there are also some moments where I felt the jumbled plot could have ruined the film, but Cuaron's vision and direction holds it all together and makes for a wonderful viewing experience. This film lacks some of the magic that the first films had, but the performances, writing, direction, cinematography, and tone are all spot-on. Really liked it!

QR Review Harry Potter and the prisoner of Azkaban

this movie.... is dark. but it doesn't go too dark it does have some funny moments. harry potter and the prinoner of azkaban, a way better movie then the last two thats for sure. the way the movie tell you that this movie is going to be better then the last tow movies is that. harry runs away from his uncle and aunt and i dont blame him. and you see harry wih his suitcasee, in a park and in the dark looking in the distance and the camera shot in just that scene shows volumes that this harry potter is not like the others and you better be ready. i havent talk abou the soundtrack of these movies. its to die for. you know the harry potter theme its iconic and for a good reason. their also many other songs in the harry potter soundtrakcs that you should check out when your wanting to go to …

Improves Upon The First Two

After two entertaining and likable films starring the students of Hogwarts, we have the first truly great Harry Potter film. Harry Potter and the Prisoner of Azkaban takes everything that made the first two films great, and expands upon them, making this easily the best Potter film so far.

Harry Potter and friends are once again studying at Hogwarts, though the escape of an insane murderer named Sirius Black threatens the lives of everyone at Hogwarts, namely Harry.

The characters are as lovable as ever, music is great, acting is (mostly) solid, etc. Harry Potter and the Prisoner of Azkaban avoids many of the pitfalls of the first two films, and manages to bring a whole lot of new magic to the series.

The story, while seemingly simple at first, becomes more and more complex as …

Harry Potter and the Prisoner of Azkaban review

Clearly much better than the first installment. A more mature cast and roles which were portrayed well by Emma Watson and Daniel Radcliffe. Amazing visual effects though some I thought were obviously mechanical in nature. One will be in awe for certain scenes that entail remarkable effects. The score and cinematography was just gorgeous and pleasant to look at. Its plot was like a mystery and had revealed certain backgrounds of certain characters such as Sirius Black, Remus Lupin and Peter Pettigrew. The screenplay was well executed based on the few lines from the film: Albus Dumbldore - "The consequences of our actions are always so diverse, so complex, that it makes predicting the future very difficult, indeed." Sirius Black - "You should have died! Died rather than betray …

No posts have been made on this movie yet. Be the first to start talking about Harry Potter and the Prisoner of Azkaban!