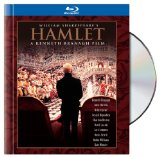 Plot: Kenneth Branagh directs and stars in an adaptation of Shakespeare's drama, using the original words as a son comes to avenge his father by murdering his uncle - who is now his step-father. Madness, plots, conspiracy and death will follow in turn. -- Chris Kavan

For those who want their Hamlet full and uncut, this adaptation is the most faithful. Branagh, as director, excelled in drawing out the spectacle in this drama of illusions and perceptions. But as Hamlet, Branagh is a bit too Hammy. While his aristocratic wit is cutting, his antic dispostion is more foolish than disturbing. Branagh sets Hamlet in the midst of Victorian Era opulence with a large cast in costumed splendor and plenty of intrigue.

Must Watch: Historic by Daniela Moraes

No posts have been made on this movie yet. Be the first to start talking about Hamlet!