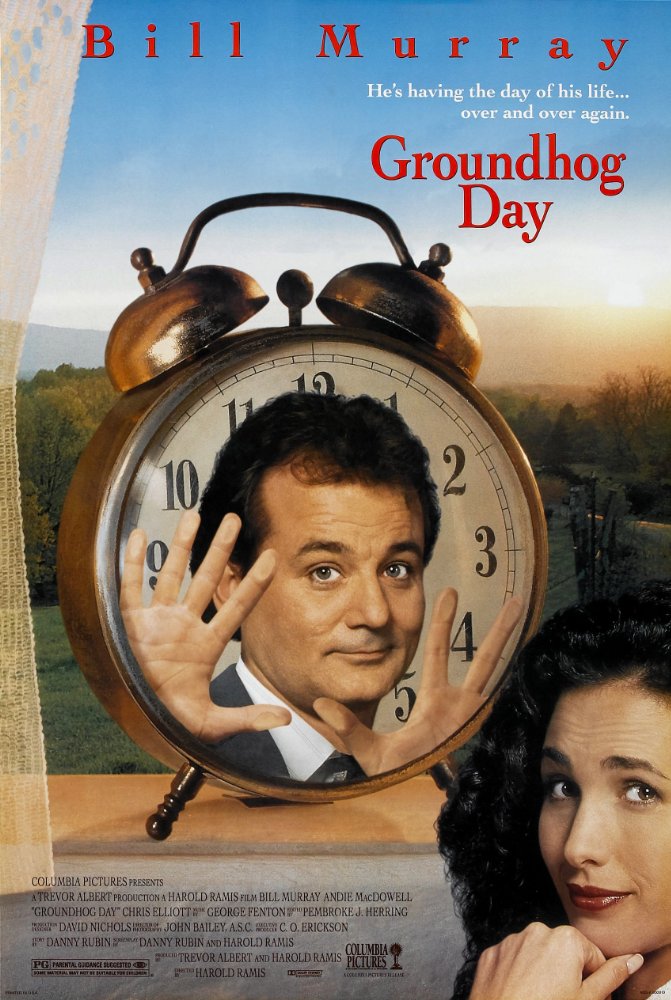 Plot: A bored weatherman is sent to cover the ground hog and his shadow on Groundhog Day, only to discover that the same day repeats itself, no matter what he does.

The amazing thing about the movie is how it's about a man reliving the same day over and over again, but never becomes repetitive. "Groundhog Day" is sensational and a definite classic.

The story is about a bored weatherman is sent to cover the ground hog and his shadow on Groundhog Day, only to discover that the same day repeats itself, no matter what he does. This movie is funny in a dark twisted way and the writing is smart.

An egotistical TV weatherman travels to small town Pennsylvania to cover their annual Groundhog Day celebrations, but finds himself trapped in time and living the same day over and over again. The premise of Groundhog Day is one of those ideas that seems so obvious that you can't believe someone didn't have it sooner; which is often the mark of genius. Like a cross between A Christmas Carol and Rashomon, a wonderfully sardonic Bill Murray finds himself living the same day and typically of this kind of Hollywood feel-good movie, grows as a person as a result. Also typically of this genre, it's actually a lot funnier when Murray is being a douche bag, but thanks to a great performance by its star, nice direction from Harold Ramis and a witty script, it never descends too far into outright …

After creating a review for a serious classic, Iâve decided to assess a film which not everybody is familiar with, and is one of favorite comedies. Bill Murray and Andie MacDowell head the cast and are well versed with the dialogue. They have screen chemistry and have likeable characters. There might be scenes that are repetitive, all of which are necessary to prove a point to âPhil,â Murrayâs character.

According to Roger Ebert: he "had initially underestimated the film's many virtues and only came to truly appreciate it through repeated viewings." It has been on many lists of funniest films (AFI ranked #34 laughs, #8 fantasy, #32 on Bravo, #27 screenplay for the Writer's Guild of America. There are laugh out loud parts that are memorable (the diner where he eatsâ a …

Repetiveness gets boring, pretty funny though

"Phil" (Bill Murray) is a Pittsburgh TV weatherman with a bad attitude. On Groundhog Day, he has to go to Punxsutawney, Pennsylvania to cover the Punxsutawney Phil ceremony.

However, this Groundhog Day is unlike any other. And it gives "Phil" a chance to change his ways.

Let me say first, even though there are slight differences each time, the repetitiveness of the scenes gets boring real quick. Only Murray's sense of humor saves these scenes, especially when they are shown back-to-back.

Out of the entire cast, Murray is the best. When we first meet "Phil," Murray makes him arrogant but pretty comical with some quick wit. He has some pretty good chemistry with Andie MacDowell, especially when her character starts to fall for "Phil" (each time he experiences the day).

No posts have been made on this movie yet. Be the first to start talking about Groundhog Day!