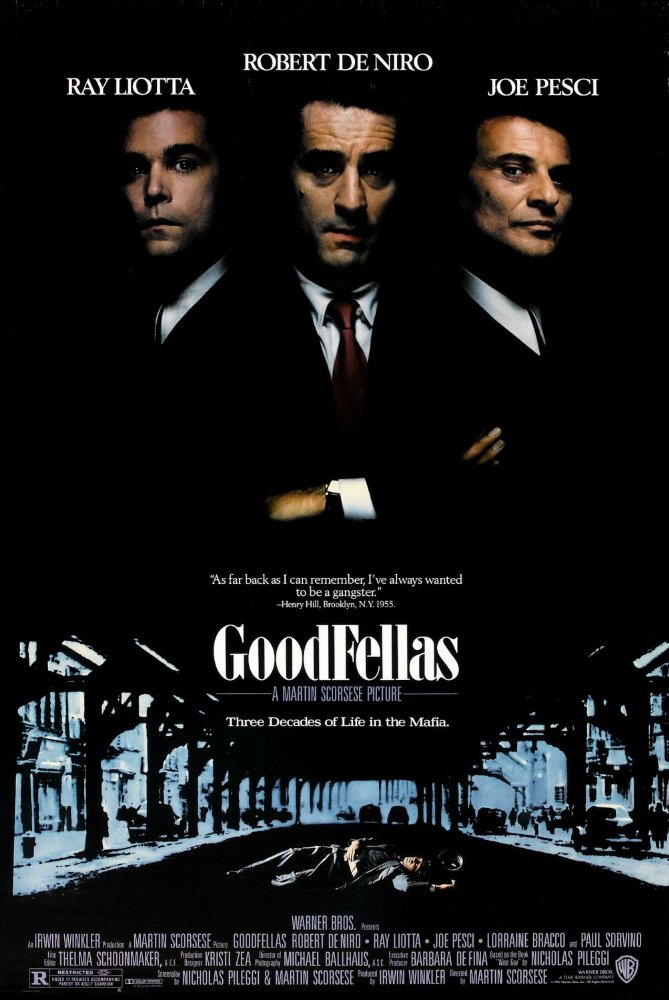 Plot: A drug dealing gangster works his way up the chain of command while building close relationships with the leader. Based off a true story.

In addition to being intensely solid and well-inspired, it's Martin Scorsese's most iconic film and probably the most defining film in the gangster genre.

The auteur's last absolute gangster masterpiece just before he started to experiment with different genres. The classic actors are back (De Niro, Pesci, Sorvino) and an awesome and stylish screenplay structure allow Scorsese to expand his Italian-influenced ideas and create a magnificent and pop-culture loved flick to open the decade. Its natural and hyperactive flow allowed it to acquire the honor of being one of the 20 films in history that have made me laugh. 96/100

The reason I made that remark above is because they are two very similar movies. They are mobster mafia movies and both have the same structure and character change. There are only a few things that can definitely tell them apart, like the narration and comedic undertones of Goodfellas and the solidity of the main character in the Godfather.
Don't get me wrong, I adore the Godfather and think it is a spectacular mafia movie, but Goodfellas is just a little bit ahead of it, in my opinion.
Goodfellas just has so much more replay value. I could sit down now and watch it, which is something I would have to think about with the Godfather.
Martin Scorsese's fresh direction and way of storytelling add a lot of …

Career criminal Henry Hill reminisces upon his life of crime in this true life story based on an actual FBI case. Goodfellas is the perfect film. It has the perfect blend of drama, gritty violence and humour as we see the dark side of the American dream played out over 25 years of a wise guy's life. The people depicted here do not play by society's rules and have their own set of laws and conventions revolving around the pure pursuit of profit in this, the logical conclusion of capitalism. The livelihoods and lives of others are commodities to be used up and tossed away and life is cheap to these mobsters whose stated obsession with loyalty and family is also soon forgotten for the "big score", leading to total anarchy. The combination of DeNiro, Liotta and Pesci makes for a brilliant …

Astounding screenplay with a few quotes from the film: Henry â âMurder was the only way that everybody stayed in line.â âYou know, we always called each other goodfellas. Like you said to, uh, somebody, "You're gonna like …

No posts have been made on this movie yet. Be the first to start talking about Goodfellas!