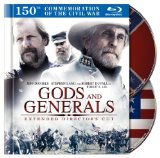 Plot: Biography of the Confederate general Thomas "Stonewall" Jackson and his rise, and untimely death, during the American Civil War. -- Chris Kavan

Follows the same basic structure as Gettysburg and with, basically, the same results. The cast is all-pro and plays their roles believably. The real highlight, of course, is the gorgeous cinematography and production design.

No Gods but Too Many Generals

The followup to 1993's sleeper hit Gettysburg is not as bad as people say it is but it's definitely flawed. Most of the acting is fantastic with inspired casting such as Robert Duvall as Robert E. Lee, Stephen Lang as Stonewall Jackson, and Jeff Daniels as Joshua Chamberlain. The battle sequences are staged as they should be-as an actual battle might have been fought with no fancy camera angles or fast-paced editing or that bloody shaky-cam.
The first of two issues that I can raise as genuine complaints which can bring the movie down is its length. I understand that Gettysburg is the same length but Gods and Generals simply does not pack the same dramatic punch as its predecessor and the four hour running time reveals this to the audience. It has no sense of momentum and there are many …

012 Movies I Walked Out On by sapien

Worst All Time by preston

No posts have been made on this movie yet. Be the first to start talking about Gods and Generals!