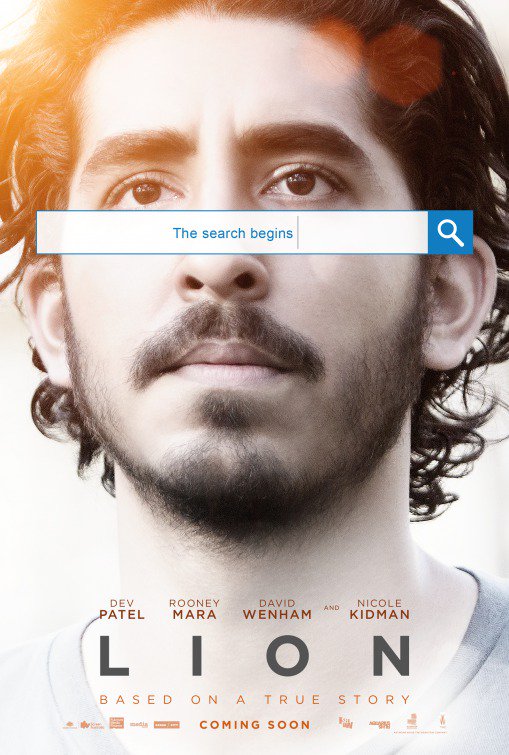 Plot: As a five-year-old, young Saroo finds himself alone on the bustling streets of Calcutta, separated from his family and far from home. After surviving many hardships, he finds himself adopted by an Australian couple. Fast-forward 25 years and he is ready to make the journey to track down his lost family. -- Chris Kavan

Emotionally effective drama that does sometimes feel like two separate movies. However, Dev Patel and Nicole Kidman are great, delivering excellent performances. Newcomer Sunny Pawar is immediately endearing to the audience as the young Saroo who makes his harrowing and often frightening journey though the dark streets of Calcutta as a lost child. Patel plays an older Saroo who is compelled to retrace his roots and reunite with his Indian family with the assistance of his adoptive family (mother played by Kidman).

It is the mark of a great movie when it can make you feel as many and as wide a range of emotions that this movie did. I cried because of sadness and happinesses and I felt both luck and selfish during the tow hours of this movie. I highly recommend it.

Lion offers a story that is staggeringly remarkable but then, in the meantime, totally universal. It is a sincerely emotional film about being lost and getting found and finding yourself. Pawar is nearly unfairly great as the youthful Saroo and regardless of the fact that Patel is exceptional, the film gives the more seasoned adaptation of the character less to do (or, in any event, insufficient time to do it).

Labeling something as "inspirational" and "based on a true story" can often be a setup to a schmaltzy film that pours on the saccharine and puts an overly happy face on any situation. Lion, however, gets everything right. It isn't all sunshine and happiness, it's struggle, danger, obsession and yet it takes you on an emotional journey that will certainly put a smile on your face even as you're wiping away those tears.

Lion follows the story of Saroo, who we first meet as a five-year-old boy growing up in a village in India. The young Sunny Pawar is perfectly cast in the role and I can't imagine the movie without him. Saroo lives with his mother, older brother Guddu and infant sister Shekila in harsh conditions, having to steal from a coal train just to get milk to drink. But things …

Remember when I said "Manchester by the Sea" is a dramatic tearjerker, but the difference is that Manchester was a great movie and this one isn't.

I'm not saying "Lion" is a bad movie or anything, but best picture worthy? Heck no! I mean, the emotional elements are there that unfortunately didn't hit for me. It's a movie that's not going to stick with me after the end credits or a few years time.

And Rooney Mara was completely wasted in this movie, as she didn't do anything to the story and was only a plot device.

The only great things in can say about "Lion" is Dev Patel and Nicole Kidman outstanding performances. Especially Patel who I always thought was a great actor way before "Slumdog" came out. In "Lion", he shines and this is by far his strongest performance yet. Even …

No posts have been made on this movie yet. Be the first to start talking about Lion!