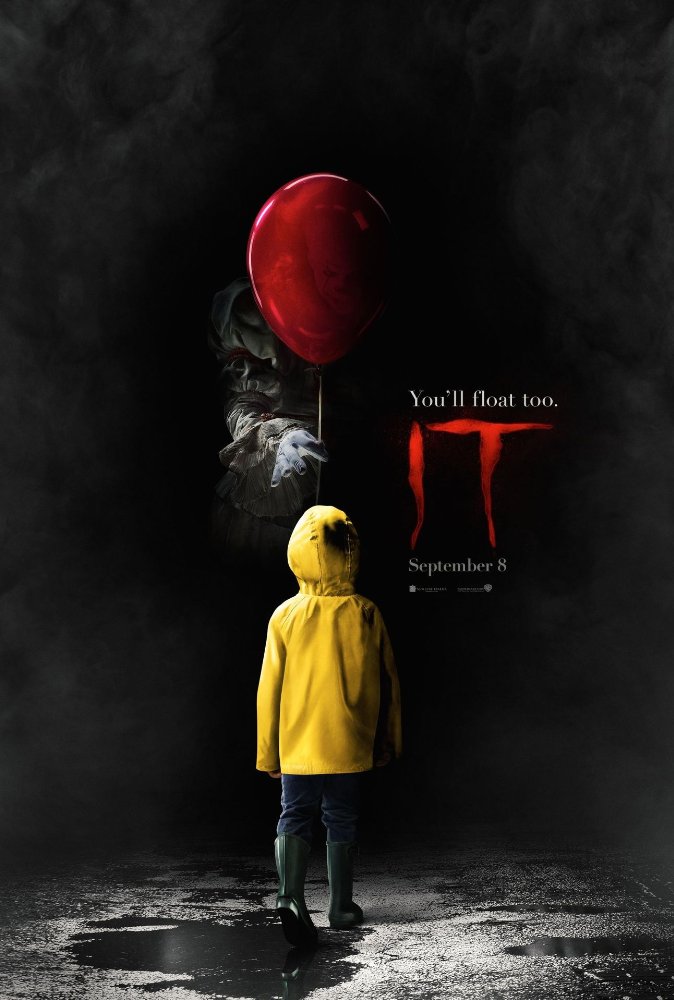 Plot: The Losers Club is a group of like-minded outcasts that come together in the town of Derry, Maine. While dealing with the normal problems of adolescents and bullies, the town of Derry is also beset by an ancient evil, one that can take the form of whatever a person fears most - and it likes to come after children the most. -- Chris Kavan

The "It" miniseries will always live on as a cult classic, but 2017's theatrical remake improves upon its nightmarish quality, while also keeping the core themes and spirit of Stephen King's coming-of-age horror fable.

The biggest horror movie of all time is a sufficiently creepy and well acted thriller. However it is not as scary as promised in the trailer. Don't be alarmed, this isn't a slight against the dark tone and unsettling sequences that work at putting the audience at ease. But there hardly was a moment of genuine dread, more like anxiety. Though some may be more susceptible than I was. Still, no one can accuse the cast of being lazy. Bill Skarsgard is perfectly cast as Pennywise the clown. The young cast do a good job;standouts include Sophia Lillis and Finn Wolfhard as Beverly and Richie. 'IT' is entertaining. It boasts a nasty villain, solid direction from Andres Muschietti, and a few standout scenes.

A group of high school kids discover the presence of a malevolent entity stalking their small town that has taken on the appearance of a circus clown.

An adaptation of the Stephen King novel of the same name, the 1980âs setting and presence of Finn Wolfhard in one of the lead roles are a pretty obvious indication as to which particular bandwagon It has hitched itself to. But the combination of likable leads, nostalgia, themes of coming of age and adolescent angst wrapped up in familiar horror mythology works for similar reasons that Stranger Things did. There is little of any real originality on show, some of the âif we all come to together we can do anything!â speeches are a little laboured and the effects-laden set pieces involving Pennywise tend to be a little overlong, but …

I'm not much of reader when it comes to books. The reason why I couldn't care less when a book gets adapted into film, because not every word is gonna translate well on screen. However, I do remember at a young age watching the 1990 adaptation starring the amazing Tim Curry. While I was never scared, due to it's goofy and sloppy scenes, but Curry performance left a last long impression on me and other people. Re-watching the TV movie didn't help to painfully realize how out dated it is. I wouldn't even call it good, just bad. If a reboot was ever needed, this was it. Now here we are today.

"It" (2017) is a massive improvement and avoids watering it down like other terrible TV movie adaptations. While not on the same level of greatness like "The Shining", "Stand …

I desperately wanted to like this film, I really did. After all, I'm a huge Stephen King fan, and had just finished re-reading the entire 1153 pages of the novel the movie is based on. This story is only surpassed by King's other mammoth work, 'The Stand'. But reading the novel before seeing 'It' was my first mistake. I understand that it is difficult to cram in 500+ pages of book into a 2 hour movie (I say 500+ because the film only covers half of the time-span laid out in King's novel). In watching 'It', I realized just how deep these characters are drawn in the book, but the film lacks the time to provide anywhere near the same depth for even just the main characters.

At least we do get to know the 'Losers' by their signature quirks. Bill Denbrough (well played by Jaeden Lieberher) …

No posts have been made on this movie yet. Be the first to start talking about It!