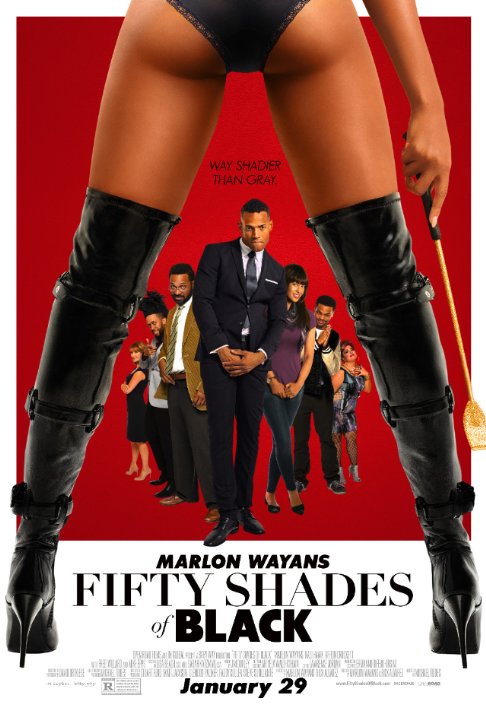 Devoid of a single good laugh, "Fifty Shades of Black" has the distinction of being worse than the movie it parodies.

Fifty Shades of Grey looks great compared to this.

ok so saw this and while it wasnt the worst movie ever it was just kinda dumb i mean yea i expected that from a waynes ,movie but it just didnt deliver the way others in their past have it was cute thats about all i can sday

Let me get this straight:
1. This is a ripoff of Fifty Shades of Grey.
2. Marlon Wayans directed this and was in Scary Movie 1 and 2.
Okay... MARLON WAYANS I HATE YOU NOW YOU STUPID COW!!!
I will be angry about this movie:
FIFTY SHADES OF BLACK IS A HORRIBLE COMEDY MOVIE THAT RIPS OFF AN ALREADY CRAP FILM AND THIS IS JUST A TERRIFYING SIN THAT ACTUALLY MAKES GREY LOOK LIKE A GOOD MOVIE (but if we're talking about sins, I would probably be talking about The Neverending Story III: Escape from Fantasia)!
JOKES ARE REALLY DULL AND LAME, STORY IS MESSED UP, CHARACTERS SUCK TERRIBLY, AND OVERALL, THIS IS SO ANNOYING, IRRITATING, AND IS POSSIBLY ONLY FOR PEOPLE WHO DON'T HAVE ANY COMMON SENSE IN THEIR BRAINS!
SO IN CONCLUSION, FIFTY SHADES OF BLACK SHOULD BE BURNED AND NEVER MENTIONED …

If I watch this movie a dozen more times I wonder if it will eventually get funny.I watched it once & once was 1 time too many.I struggled & strained to sit through the entire thing.I don't think I laughed once while watching it.I might have grinned, smiled, or smirked, but I never truly laughed.I know I spent the majority of the time cringing.I watch anything and everything the Wayans put out and usually find them funny.White Girls did suck but it didn't suck as bad as 50 Shades Of Black did.The funniest thing about 50 Shades Of Black was the trailer.It's what made me really want to see it.Maybe if I would've seen 50 Shades Of Grey or even read the book (I have NO interest in doing either) before watching this, I might have enjoyed this movie or liked it but even then I really don't …

'Fifty Shades of Black' is most definitely one of the worst parodies ever made. It's not as scattered, unfocused, or soul crushing as the past abominations from Friedberg/Seltzer (i.e. 'Epic Movie', 'Disaster Movie' -- and so on). However, it does stand shoulder-to-shoulder with those turds in terms of it's terrible sense of humor. You can really only critique parodies on your scale of laughter. Well, I didn't laugh once. Not even a tiny smirk or grin. Almost all of the "jokes" (pshh...) revolve around explicit exaggerations of gross bodily functions or the absolute worst racial stereotypes. That's IT! There is no humor worth any substance. The repetitive mean spirited nature of the characters made for a frustrating watch. One particular recurring character was so damn …

Movies I have seen this year by Chris d

No posts have been made on this movie yet. Be the first to start talking about Fifty Shades of Black!