War for the Planet of the Apes Movie Information 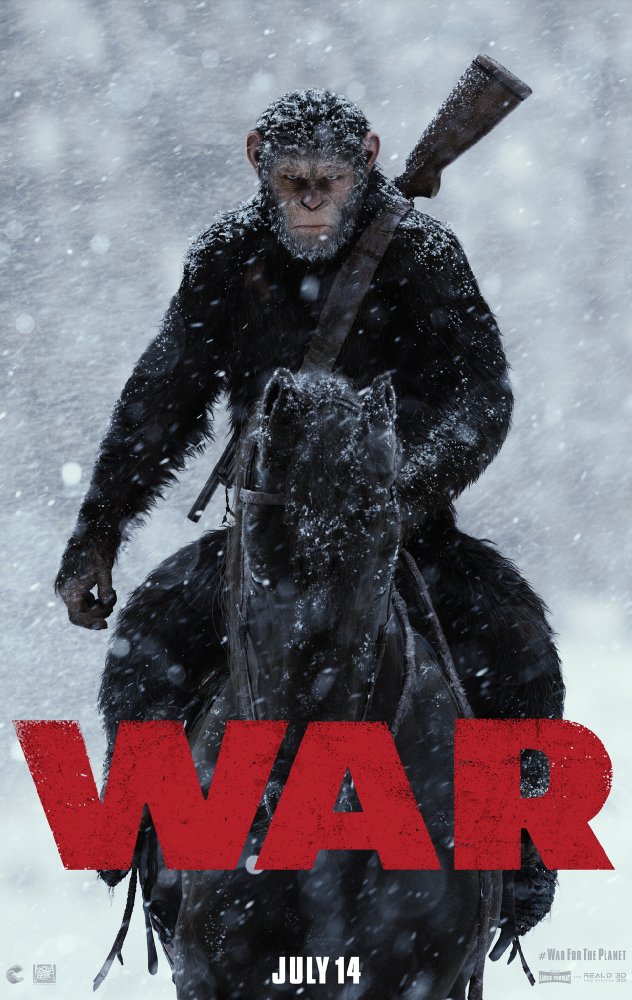 Plot: Caesar now leads a nation of genetically-modified apes. But when a human army, led by the ruthless Colonel, starts a war - it leads to staggering losses for the apes. As Caesar recgroups, his darker instincts rise and his quest for vengeance will lead him face-to-face with the Colonel and the fate of both sides will be decided. -- Chris Kavan

Although not without faults (annoying Steve Zahn chimp), "War" is a worthwhile conclusion to one of the best action franchises of modern cinema.

Andy Serkis revolutionized the motion-capture genre, and his work as Caesar in this finale, as well as a the whole current Planet of the Apes trilogy was once again worthy of Oscar contention, and once again, ignored.

Not as action packed as I thought. But it's good enough thanks to its stellar visuals, dark tone, thematically rich story, and great actors.

"War For The Planet Of The Apes"

As the war against the humans continues, Caesar abandons his people to pursue a vendetta against the renegade commander who executed his wife and son.

The third in the series of reboots of the classic dystopian sci-fi, War follows the example of the second instalment which preferred action and spectacle to the more high-minded themes that marked out the original film. Technically the film is similarly impressive, with CGI characters that feel like real protagonists bolstered by Andy Serkis' singular talent in this department and thanks to nice cinematography and production design it is always attractive to look at. But with the intelligent themes of man's treatment of the natural world and the nature of what it is to be "human" completely stripped away, it fails to engage on any …

The rebooted Planet of the Apes franchise reaches its third installment, the final film in a trilogy driven by Andy Serkisâ Caesar. Matt Reeves helms this epic masterfully, taking the series to new territory. After the events of Dawn of the Planet of the Apes, men and apes are at war. Caesar has been forced into the conflict, not because he wanted to, but because he knows what man is capable of. We see him and his monkeys pitted against the ruthless Colonel, played by Woody Harrelson, who is bent over the extermination of ape-kind. Caesar must now face his own demons as he prepares for one last battle.

This entry in the series brings to a close one of the greatest character journeys weâve seen in recent history. These films are very character driven, where the apes are even more …

2 years after the events of Dawn, Caesar (Andy Serkis) and his Apes live in harmony in their woodland home, until a military attack leaves their home destroyed and the Apes left to find a new home. Caesar, angered by the death of his wife and son, goes on a quest to find and kill the human colonel (Woody Harrelson) who sent the soldiers.

The first thing I'd like to say is that I really enjoyed this movie. A lot of people didn't like the fact that this was a more slow burn, dramatic, character driven piece, rather than 2 hours of Apes and humans fighting each other. I personally didn't mind the slow burn style, because along the way we meet new characters (mute human girl Nova, played brilliantly by Amiah Miller without ever having any dialogue, and comedy relief Bad Ape, Steve Zahn …

No posts have been made on this movie yet. Be the first to start talking about War for the Planet of the Apes!