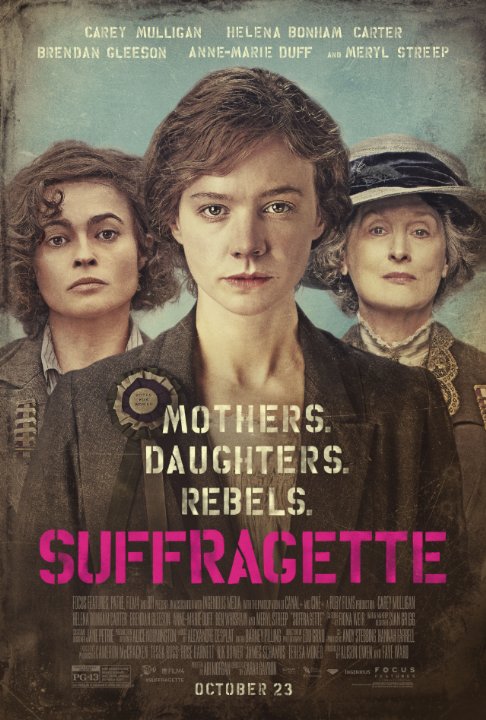 Plot: Charts the early days of feminists movement: when peaceful protest failed to get the attention of the state, working-class women were forced underground where they risked everything for equality in an increasingly violent game of cat-and-mouse. -- Chris Kavan

Not as powerful as a movie of this nature should be, but nevertheless stands to be topical.

Suffragette is one of those historical dramas that draws from a rich subject matter and is clearly enthusiastic about it. But it alternates between a rosy romanticizing of historical events and grim realism that never quite meshes well together. This makes it hard to root for the female activists as their actions become increasingly more violent. The cast is good. Carey Mulligan and Helena Bonham Carter are fine as the protagonists. Meryl Streep's appearance is basically a cameo. Rip-off.

While I thought Suffragette wasn't bad or Oscar bait as I expected it to be, but it is an average movie that I won't be re-watching. Carey Mulligan gave a strong and brilliant performance, so did Helena Bonham Carter. I think it's great to fight for your own rights, but I wish it didn't feel forced and cliche as this movie presents it. The Oscar wining Meryl Streep is barely in this movie which is a real shame, because shes in the freaking poster and the trailer for the film basically fools you into thinking shes in the whole movie.

Fight for Your Right

'Suffragette' follows the path of most historical dramas. It has an accuracy to the time and place of the events shown, and sheds light on a lesser known hardship that was overcome. These women had a LOT to overcome, as it turns out. The only problem is that society at the time didn't allow them to stand up for themselves in a proper manner to where their voices would be acknowledged and discussed. They were so shunned that they had to resort to random acts of violence, even putting themselves in the face of danger, just to be seen. This is all shown, but only partially felt. The direction never had me emotionally invested. We aren't given much to these characters other than the fact that they are strong independent females fighting for a cause. The only one with much …

No posts have been made on this movie yet. Be the first to start talking about Suffragette!