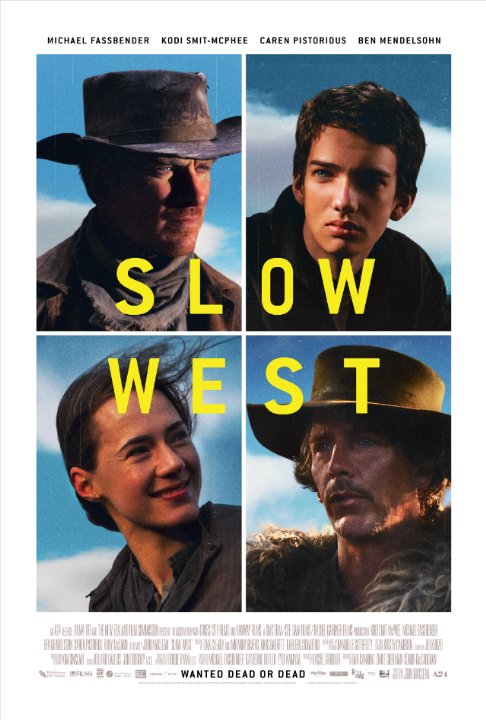 Plot: A young man travels deep west in search of a girl who fled with her father after a fight gone wrong. A drifter joins him and the road is full of bounty hunters of wich he's not e stranger. -- travincal

Kind of cutesy for a western, but "Slow West" is a pleasant and stylized approach to the familiar genre.

'Slow West' is not your typical western by any stretch. It's a fun romp in genre exercise, but done so in a very off-beat stylistic fashion. The storytelling is about as straight-forward as possible. The plot and characters are dealt with the simplest of explanations. It's essentially a collection of creative situations and ironic humor all set to a classic western vibe. Striking cinematography fills every perfectly placed shot. I haven't seen a western this bright and lively in a long time. A pleasant breezy watch, by anyone's standards.

A young Scottish man reluctantly teams up with a gun-slinging drifter to make his way west and find the girl he loves. Slow West is a stranger in a strange land road movie as wide-eyed innocent Kodi Smit-McPhee is taught the ins and outs of survival on the trail by hard-bitten cynic Michael Fassbender. It is a nicely shot film that makes the most of some attractive scenery and its low key approach makes a change from the usual fast-drawing Wild West shenanigans. But it is really only Micahel Fassbender's presence that lends any real weight to the rather bare-boned story which leaves the film feeling rather insubstantial; there is little to dislike about Slow West, but there is little to it full stop. It is a pleasant enough distraction nevertheless, that will appeal to fans of Dead Man …

Love and Death in the West

Slow West is a story about love, but also about trust - and how putting your trust in the right (or wrong) person can mean the difference between life or death - especially in a place as unforgiving as the West.

We follow the a young, Scottish man Jay Cavendish (Kodi Smit-McPhee) who is traveling west to reunite with the girl he loves, Rose Ross (Caren Pistorius) who has fled with her father (Rory McCann, probably known to many for portraying "The Hound" on Game of Thrones) following a crime. Unprepared and seemingly with little knowledge about just what he is getting in to - he stumbles upon a group of ex-soldiers only to be rescued by a lone drifter/bounty hunter Silas Selleck (Michael Fassbender). He decides to save the boy and accompany him - though he has his own motives as Rose …

Slow Westâ must be counted one of the most unintentionally
ridiculo us Westerns to come down the pike in a long, long while. From first
till last, this tale of a hard-boiled bounty hunter helping a Scottish lad on
his quest to find the woman he loves, whoâs on the lam in the old West, is a
tissue of creaky contrivances and outright absurdities.&amp;nbsp;&amp;nbsp;&amp;nbsp; A young Scottish man travels across America in pursuit of the woman he
loves, attracting the attention of an outlaw who is &hellip;

Stunning cinematography coupled with some harsh lessons about surviving the West. This and Tommy Lee Jones' The Homesman prove to me that the modern western is alive and well.

A Scottish musician turned filmmaker who previously directed Fassbender
in two shorts (âMan on a Motorcycle,â âPitch Black Heistâ), Maclean at
once evokes and defamiliarizes the wide open spaces of the American
West, played here,&amp;nbsp;in a subtly bold stroke of casting,&amp;nbsp;by rugged New
Zealand. Whether or not audiences realize theyâve wandered into
Middle-earth rather than Monument Valley, itâs hard to watch âSlow Westâ
without feeling a surreal, almost &hellip;

I have't seen such great shots since Phase 4. The story is food for the brain and some genuine comic situations are inserted. the jar of salt for example. there are, also, some witty facts: rubb your face with secretion from a tree to not get sunburns, dry your wet clother by using a rope between two horses. and so your on the way to great fun and adventure.