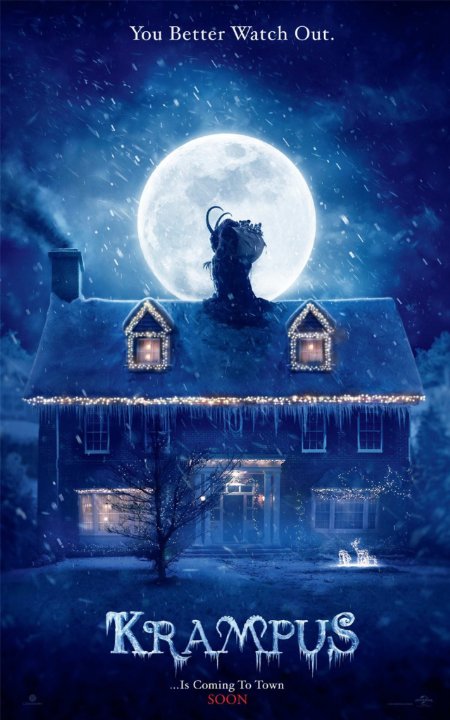 Plot: A young boy in a dysfunctional family has to sit through yet another disappointing holiday - but this time, he's had enough. Fed up with the Christmas spirit, he turns his back on everything... only to summon Krampus, a demonic force bent on punishing non-believers. As beloved icons turn twisted and evil, the boy will have to pull his fractured family together if any are to survive the festive onslaught. -- Chris Kavan

You better watch out You better not cry Better not pout I'm telling you why Krampus is coming FOR YOU âKrampusâ is so beautifully shot that certain shots, even years later, have been stuck in my head. The colours perfectly fit the holiday despite the unfortunate terror that lies ahead for this family. One of the longest nights of Christmas eve. The sound work as well is really detailed and rich, which is something I didnât expect. Still, itâs a goofy horror movie that doesnât quite stand next to the greats, in terms of other Christmas movies, but am weirdly drawn to horror movies set around Christmas, because surely nothing bad can happen on Christmas.

There have been a few attempts to mix Christmas with horror, all with varying degrees of success (or not). Krampus mixes in comedy with horror and, while it's not entirely successful, it's good enough to pass the time and is certainly a nice change of pace from It's a Wonderful Life.

I know. I know. Christmas is far behind us already

"He's is always ragging on Christmas. He even told the first graders that Santa was just a cheap marketing ploy invented to sell Pepsi."

"Krampus" was a movie I was really looking forward to. Partly because I picked up a radio report about a ban in some Austrian villages to use this folklore figure (I had never heard of it by the way) and his assistants. And partly because I was curious how a horror Christmas movie would look like. It's something different than the annual traditional Christmas junk we see on the tube. I was a little bit disappointed about this film, because the horror level is pitifully low. It was amusing though, on some level. Unfortunately it wasn't really the Krampus who predominated this movie, but rather his vicious little helpers. And those helpers really …

'Krampus' invokes the fun 80's horror comedies that skew more towards a family audience, while not being entirely kid friendly. It strikes that perfect tone between frightening and funny, never letting one outweigh the other and coinciding nicely. That said, I was left wanting much more. I felt both areas needed more of a punch. It was almost too safe at certain times when it could've gone further. Individual fun moments are sprinkled in that utilize holiday customs in dark ways. I loved the look of the entire film - from the snowed in festivities, to the decorations, to Krampus and his many different minions, - it all felt like classic Christmas. The holiday is done justice. A majority of practical effects/costumes add to the seasonal mis-givings. I very much appreciated all …

No posts have been made on this movie yet. Be the first to start talking about Krampus!